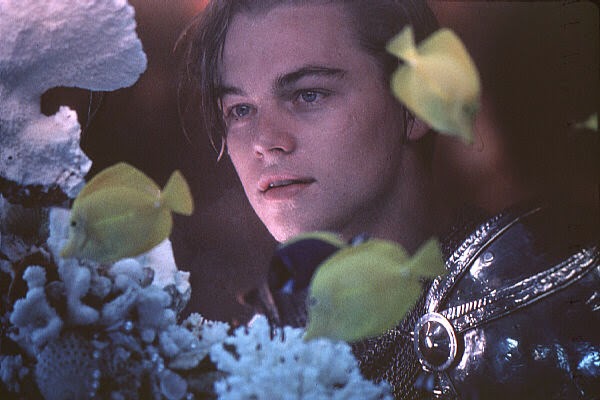 I have an embarrassing confession to make: as a teenager I was absolutely obsessed with Leonardo DiCaprio. And I do mean obsessed. I knew his height and his favourite food and I kept track of things he'd said in interviews and cut his picture out of magazines.

It probably had more to do with his role in the Titanic film, but N and I recently watched Romeo and Juliet so I'll try to keep this blog post focused on the that and not on Titanic.  Perhaps if I rewatch that soon, I'll do another post on my feelings about (Leo) Titanic.

I must have seen this film a hundred times as a teenager. I'm pretty sure that I skipped school in order to see this in the cinema.  Watching the film again made me realise the extent of my obsession with this film.  I'd loved reading the play before this film came out and I already knew some passages off by heart (some parts of the beginning, definitely the balcony scene and some others) but I had to resist quoting the entire movie off by heart. I don't think N would have been too impressed to sit there as I humiliated myself by knowing every single word.

Certain scenes still got to me. The fight with Tybalt where Romeo screams 'be satisfied!' his outburst in the desert 'I defy you stars!' But I see now what I didn't as a teenager. How mopey and angsty and a loner they've made Romeo in the film with his moody cigarette smoking and his hastily scribbled poetry. I may have lusted after him as a teenager but I see now it would have never worked between him and I. And all those scenes where Leo is wet? I had to laugh. 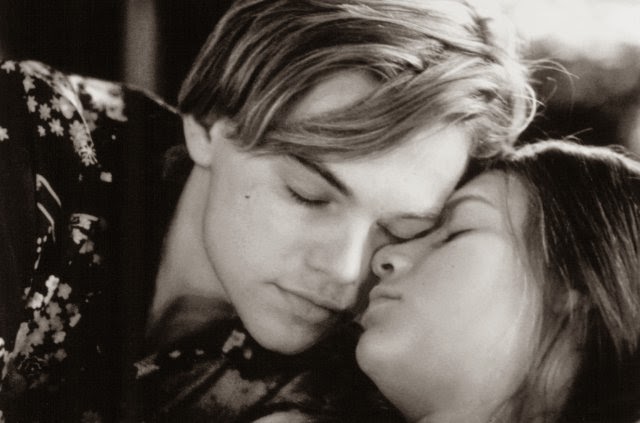 Watching this film again after all these years made me feel really nostalgic. There were characters in the film that I hadn't remembered. And it was definitely funnier than I remembered. Juliet's nurse was a riot. And while the whole thing didn't hit me in the feels in the same way as when I watched it as a teenager, I was still swept away in it. The music especially threw me back in time to when I used to listen to the soundtrack over and over again.

It was hugely fun to return to an old favourite and relieve some of my teenage obsession.
Written by Michelle Fluttering Butterflies at 09:04