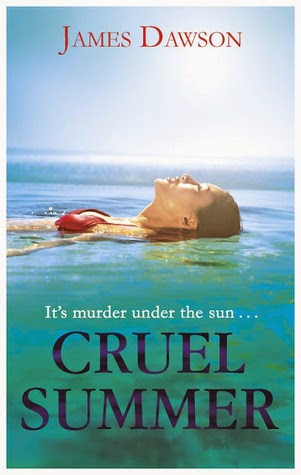 Tagline: It's murder under the sun...

A group of friends scarred by the suicide of a close friend the year before reunite at a Spanish villa in the hope of laying some demons to rest and salvaging the scraps of their friendships, if only it didn't start to look more and more like the suicide was actually a murder someone will go to any lengths to prevent being discovered...

As a fan of psychological thrillers I'm quite interested in the recent emergence of YA thrillers. During my own teen years I read countless Point Horror, R.L Stine and Christopher Pike books so I had high hopes that 'Cruel Summer' would scratch my nostalgic itch, particularly as these authors are name-checked in the acknowledgements!

Unfortunately 'Cruel Summer' just didn't work for me. Although the book revolves around a group of characters all of whom seem to harbour resentments towards at least one other member of the group, the majority of the story unfolds from Ryan's perspective.

Ryan, a very dramatic and ambitious drama student likes to see his life unfolding as the plot on a T.V show and constantly refers to events along the lines of 'that doesn't happen until the 3 season...' something which quickly becomes irritating,. It's also a shame because he is the least intriguing character here when there are twins Greg and Alisha, Greg with a burgeoning career as a successful footballer but with a secret that throws his life into turmoil and Alisha, a recovering alcoholic still suffering the emotional repercussions of being dumped the previous summer. There's also Katie whose villa the group are staying in, an elusive 'good girl' still struggling with the part she played in the betrayal of Janey the friend who died, and then of course there's Ben, Janey's boyfriend and Katie's first love.

This is quite a fast paced book and to its credit I went back and forth over who I thought was behind the various sinister developments. The short chapters often end with a dramatic moment which the compels you to keep reading and I enjoyed reading the chapters from Alisha's perspective, mainly as she seemed to be the only character not behaving like a complete spoilt brat every five minutes.

Although you could see the plotting and characters here as a homage to the teen horror films and books of the 90s which all feature mostly archetypal characters like the jock, the nerd etc,  I do think this style could have been put to use more cleverly if the characters had been developed more. Ryan refers to his friends as 'the jock, the geek, the good girl and the bad girl' but all this really does is highlight how little we get to know them.

The ending of the book had some surprises, particularly in its last few pages although by the end things were no longer just about tying up the loose ends of the previous summer. I did think the eventual motivation for the unsettling events at the villa seemed a little bit flimsy but it wasn't the most unbelievable element of the story.

I'd recommend this book to anyone who wants a quick read with characters you wouldn't want to relate to, its certainly entertaining if shallow and will definitely help you to appreciate your friends if, as I'd hope, they're nothing like this bunch!

Thank you so much, Hayley!
Written by Michelle Fluttering Butterflies at 08:30