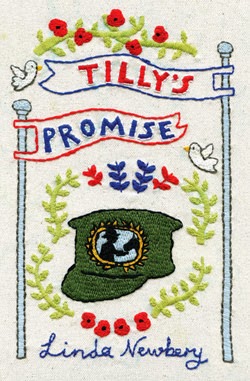 I really loved Tilly's Promise by Linda Newbery.  I thought it was a really sweet and emotional book and I was very surprised by how much I felt for the characters despite this book being quite short.  I even had tears in my eyes at several different points of the story!

Tilly's Promise is one of the first books by Barrington Stoke that I have read but I will certainly be picking up more especially after the strength of this book. I loved both the characters and the story.  Linda Newbery did a great job of pulling me into the WWI setting with some nice (but brief!) historical detail. I think the cover for this book is absolutely beautiful and very in keeping with the story line, especially as Tilly, Harry, and Georgie send each other postcards throughout the book.

It's the story of Tilly, a young volunteer nurse that is trained and sent off to France to help out in the war effort.  She has a sweetheart, Harry, who is a soldier. When Tilly's younger brother, Georgie - a gentle, good-natured boy with learning difficulties, is being sent off to war as well, Tilly asks Harry to keep Georgie safe.  That promise proves difficult to keep as Tilly and Harry both witness death and injury as soldier and nurse.

I had no idea there were no restrictions in place to protect young people with learning difficulties like Georgie who was more than capable physically but not necessarily mentally or emotionally.  I also really liked that Tilly, as a nurse, comes to empathise with the German soldiers during her shifts as well and another emotional scene comes when Tilly makes her own well-intentioned promise to a soldier that she finds herself not able to honour.

Barrington Stoke books are aimed at struggling, reluctant or dyslexic readers. Tilly's Promise is a really engaging story of World War I.  I really enjoyed the shorter chapters, the interesting story line and how emotionally invested I became in the characters and of Tilly and Harry's relationship.  Really recommended!
Written by Michelle Fluttering Butterflies at 08:53