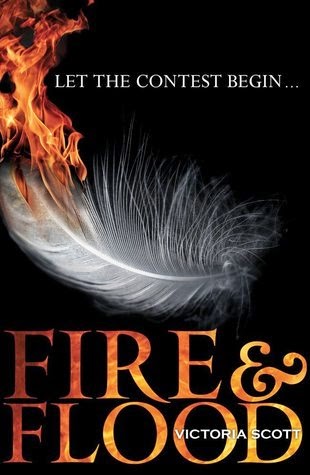 I highly enjoyed reading Fire and Flood by Victoria Scott. At first I was wary of all the Hunger Games comparisons that were floating around the internet, but I decided to give the book the benefit of the doubt. I was gripped almost immediately by the premise of the story.

Tella, the main character was relatable. She wants to help her brother who has cancer and will do anything to save him. When she has the chance to enter the Brimstone Bleed; a series of trials over different terrain, where she could win the cure her brother so desperately requires she leaps at the opportunity.

Fire and Flood kept me in suspense and therefore made me continue reading because there were so many questions I needed answers to, some of which were answered in this book. Victoria Scott is a fantastic writer who has included great descriptions and a plethora of action in the story. I would have to say that Fire and Flood was more action-focussed than character-focussed.

The action really does drive the story. While I liked Tella and thought she was a good character, I felt that she could have taken more initiative as others had to save her when she could have saved herself. However, in fairness, Tella did grow as a character and in the end, she could look after herself.

I really liked the idea of the Pandora; each participant in the Brimstone Bleed gets a Pandora (think of a Pokemon and you’re on the right track) who has special abilities that can help the participant. Finding out what the special abilities are can be the tricky bit. I loved Pokémon and Digimon as a child, so this aspect of the story was fantastic.

The romance was quite fast-moving and I would have liked more development and more conversations between Tella and her love interest, Guy. At times, I did have the thought that maybe this story would have been told better from Guy’s point of view because I felt he was doing more and knew more than Tella, which is never a good thought to have about a story.

What was lacking was the explanation of how the Brimstone Bleed began. It seems a bit unbelievable to me; I thought it could have been better explained. Furthermore, I had some minor questions such as at the beginning of the story, Tella and her family are living away from civilisation, so how was she found by the organisers of the Brimstone Bleed?

Overall, I really enjoyed Fire and Flood by Victoria Scott and can’t wait to see what happens next in the second book, Salt and Stone.

Thank you so much, Kulsuma!
Written by Michelle Fluttering Butterflies at 08:00