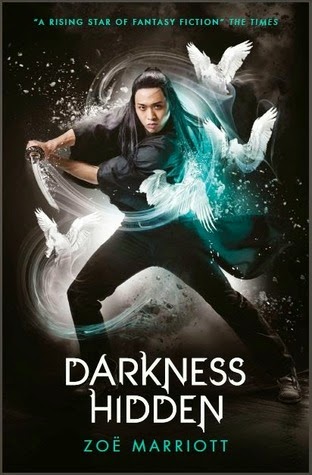 Oh wow, how much did I love Darkness Hidden by Zoe Marriott?! Darkness Hidden is the second book in urban fantasy Name of the Blade trilogy which follows on shortly after the events of the first book in the series.  If you can't quite recall what happened during The Night Itself, do not fear: the publisher, Walker Books, have kindly included a page and a half summary of what happens and who the main characters in the trilogy are in order to refresh your memory. I really do hope that other publishers pick up on this and start including their own summaries in their sequels! It's amazing.

I sometimes fear the second book in the series.  I'm usually afraid that it isn't going to live up to the first book, that it feels like filler ... and if I had any of those worries about this book then I forgot them pretty quickly.  Because what Zoe Marriott does so well with this series is that there are really amazing characters, real emotion and heart within the relationships and she brings up some really exciting and thrilling action scenes.  There was also more world-building here and lots more knowledge about what Mio, Jack and Shinobu are dealing with but this extra knowledge never feels rushed or too heavy to take in.  I thought there was excellent pacing throughout and I really was on the edge of my seat reading this book.

*I will be writing some minor spoilers to The Night Itself ahead. If you haven't yet read that book, please look away now.*

As I said, Darkness Hidden follows on immediately after The Night Itself.  Mio, our main character, together with her best friend, Jack, and Shinobu, this mysterious boy who has been freed from Mio's ancestral sword, have defeated the Nekomata and have rescued Jack's sister in the process.  But things are not going well for this group of young people. They've stopped one monster from terrorising London but more are on the way and this time, they're releasing a deadly plague across London.  The foxes are of no help, somebody close to Mio falls ill and Jack's sister is acting incredibly strangely.

This story is one of nail-biting suspense.  There were so many surprises and twists in the story-line. It was difficult watching Mio struggle so much in this book as she really felt a bit helpless and frustrated with not knowing the right thing to do or how to move forward against the demons who are after her katana.  She's also struggling with her feelings about the katana having its own will and forcing it upon Mio, and also the strength of feeling Mio has for Shinobu.  I really loved witnessing the tension between Mio and Shinobu build up as they both face what the feel for each other.

In the product description, it is hinted that Mio has to make a sacrifice in this book and I was reading Darkness Hidden I had my suspicions of who might not make it through to the end of the book and as things went along, just about everybody was a possibility.  The ending, however, broke my hearts in ways I couldn't possibly imagine and I really cannot wait to read more in the trilogy!
Written by Michelle Fluttering Butterflies at 08:00