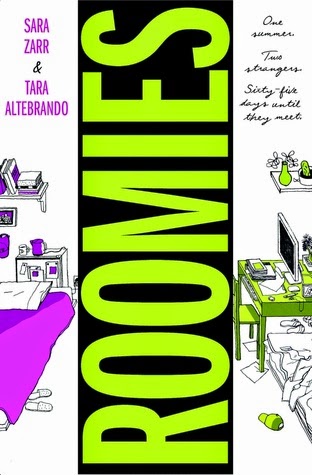 'Roomies' by Sara Zarr and Tara Altebrando covers a pivotal period of the teenage years which doesn't feature in YA very often, the transitional summer between high school and college. The story centres around Elizabeth, also known as EB and Lauren who will be college room mates in two months and begin exchanging emails as their summer progresses.

I love books told via emails, letters and journals and although 'Roomies' isn't told entirely through the emails the two girls exchange I enjoyed how the emails were used and how they demonstrated the developing friendship between EB and Lauren. This also provided me with a does of nostalgia for my own life at this age which I spent writing letters to friends all over the country.

As expected on the surface the two main characters are rather different. EB lives in New Jersey with her Mother and is an only child. Lauren lives in San Francisco near the university the two girls will soon attend with her parents and 5 younger siblings. EB lives a somewhat solitary home life with a Mother often working or going on ill­-advised dates, whereas Lauren has a loving home life yet little free time due to helping out with her siblings and also has two part-­time jobs.

I really enjoyed this book, my favourite element was that the focus was on the importance and emergence of a strong friendship between EB and Lauren. While there are important romantic developments in the lives of both characters the key to the book is the importance of friendship as a foundation to the rest of life. I enjoy YA romances as much as the next person but it did feel like a breath of fresh air to have friends as the focus rather than romance.

I also thought 'Roomies' did a really good job at dissecting the limbo of life between school and college. Both girls are emerging as adults and testing their new found independence yet still navigating the demands of family and their expectations.

The emerging friendship also liberates both girls from the demands of their existing friendships which gave me something to think about. Whilst having friends for many years can provide a stabilising foundation it can also restrict personal growth in the glare of how those friends the expect you to act and behave. This seems a particularly relevant issue when the characters are at such a crossroads in their lives and one of them is about to move many miles away from home.

I also liked the fact that neither of the girls is shown to be wealthy and both work at part-­time jobs during the summer. I find a lot of YA, particularly American books show very privileged teens who live financially carefree in large bedrooms filled with the latest gadgets and their own brand-new cars. Whilst as escapism this is fine it's also alienating for those of us with more humble lives.

The ending, while a little predictable was perfect, although at the same time I would have happily read another 300 pages as I had become so fond of both characters. I was already a fan of Sara Zarr's but I will definitely investigate Tara Altebrando's previous work now too.

Thank you so much, Hayley!
Written by Michelle Fluttering Butterflies at 08:36