Why selective mutism? by Laura Jarratt 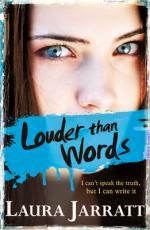 If you'd like to know more about Louder Than Words or Laura Jarratt, do visit the following websites:


Why did you decide to write about selective mutism?

In short, I didn't. I had a concept in my head of a girl who was the youngest of an incredibly gifted family and in my early ideas she’d stopped talking because everyone around her was so gifted and clever that she felt anything she had to say was worthless. That idea sounds more like the way Rafi's mutism used to be thought of, when the term used was elective mutism.

Elective mutism is often attributed to defiance or the effect of trauma.” As I researched more up to date information about the conditions, I realised selective mutism fitted Rafi's personality far better and the way in which she describes how she came to stop talking should reflect that it wasn't a conscious choice for her but a kind of phobia that built over time. In Rafi's case, she became so disconnected that she developed a much rarer condition called progressive mutism, where the sufferer doesn't speak at all. I read a really helpful blog from the parents of a sufferer about the same age as Rafi on how their daughter’s condition had progressed and how it was affecting her life. There wasn't any technical information I didn't know presented there but it’s important to be able to connect with the feelings of the family around the sufferer as well as the sufferer themselves. Rafi's mother often shows great frustration with her and it’s easy to lose patience and empathy with her, but dealing with a child with this condition can be very difficult for parents too and there’s a palpable sense of failure that comes through from their parents when they’re blogging or on help forums. I think what you see in Louder Than Words is very much Rafi's anger and frustration with her mother, and a mother that she feels lets her down. When you look beyond that, and the fact that of course Rafi is writing this in first person, you will see tiny hints that maybe she doesn't have the full picture quite sorted yet. It’s also important to remember that Rafi is a fourteen year old girl, with all of the baggage that brings in a mother-daughter relationship. Looking back on myself at that point, I wouldn't say that age wasn't a high point in me and my mother’s understanding of each other. We’re very close but when I was fourteen I remember having those feelings of how she didn't understand me at all, and I certainly didn't understand her when I look back with adult eyes.

Louder Than Words isn't an issues book about selective mutism. It just happens that Rafi has this condition, in the same way you could meet someone at the bus stop with it. People with all kind of differences are out there in society with all the maelstrom of normal life going on around them, and that’s what I like to reflect in my books.
Written by Michelle Fluttering Butterflies at 08:00