REVIEW: All Broke Down by Cora Carmack 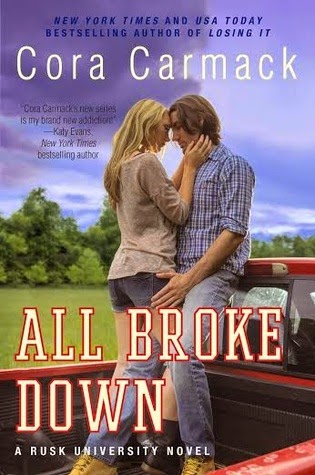 I didn't much care for the 1st book in the Rusk series, All Lined Up, if I'm honest, so I didn't begin All Broke Down, the second book in the Rusk series, by Cora Carmack with particularly high expectations... I only vaguely remembered the characters introduced to me in All Lined Up, but sort of remembered thinking Silas Moore would be an intriguing, complicated character. And he turned out to be. I really loved seeing his vulnerability in this book. I quite easily fell for him and was rooting for him from the beginning. Even though both him and Dylan both had their issues to address in their personal lives, it felt like his was the bigger journey and I loved seeing him transform into someone more mature and responsible and fighting for what is important. Plus? God, he's sexy. And him and Dylan had all kinds of crazy, hot chemistry.
Basic plot of the story? Silas is the bad boy from the football team who gets into a fight and lands himself in jail. While in jail, he meets Dylan, a political activist who took things too far on a protest possibly down to some other things going on in her life. The two decide to work together to clean up Silas's image so that he is able to remain on the football team. Meanwhile, sparks fly between them.
While I liked Dylan's character on the whole, I did find the political activism included in the book to be slightly cheesy at times. Of course, sometimes, particularly in the last third of the book, I felt like the whole theme of injustice just really worked. I kind of wanted to see Dylan's relationship with her parents to be explored more fully as well. I feel like this was only briefly touched on and more depth in this area was needed to round out her story line.All in all, reading All Broke Up was a great way to spend an evening. I think even if I am sometimes disappointed in this series (as I was with the first book) I'll also still probably continue to give the series more and more chances because sports in books is just something that I find myself attracted to.  More sports!
Written by Michelle Fluttering Butterflies at 08:00