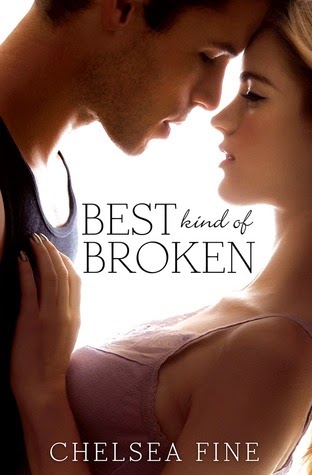 As most of you know, I'm not the biggest fan of books in the new adult genre but I will occasionally give these books a chance to surprise me and change my mind about the necessity of the genre.  Such was the case with Best Kind of Broken by Chelsea Fine and, I'm pleased to report, that I really enjoyed this book and will definitely be looking out for more by the same author and for the companion novels to this one!

Best Kind of Broken really did surprise me.  I thought initially that this book would be a rather straight forward romance story especially as the two main characters, Pixie and Levi, obviously are incredibly attracted to each other and are right from the beginning.  I thought there'd be some minor hurdle they had to overcome and then all would be good in the world.  And I was pleasantly surprised to see that it wasn't quite the case between these two.  Because of the huge amount of history between them but also this unpoken tragedy which meant that their lives and their relationship was never going to be the same.

I quite liked Pixie (real name Sarah) right from the start.  Best Kind of Broken begins with some fun bickering between Pixie and Levi as they've both come to live and work in the same inn and therefore also share the same hallway and bathroom and fight over the hot water.  I also loved the setting of the Willow Inn and all of the amazing characters that populate it especially Sarah's aunt, Ellen.  I thought there were some great characters introduced who work there but also other people who will have their own companion stories further to Best Kind of Broken.

And I liked the development on this strained relationship between Pixie and Levi and I loved wondering what on earth happened between these two that has turned their relationship from best friends to barely acknowledging each other at work.  And the missing puzzle to their history was interesting as well.  Both Pixie and Levi have a lot of healing to do on their own and they also had quite a lot to work out between them as well.  Both left so much unsaid that it would be hard to move on without tackling some of their strong feelings.  I love that the love story is at the heart of this book, there is still quite a lot of personal development for both characters and that they both had and maintained personal lives throughout ... with friends and hobbies and other love interests as well.  It's always nice to see well-rounded characters in a new adult novel. Especially one in which there is sexual chemistry and scenes but that isn't overly explicit either.

I really enjoyed Best Kind of Broken.  I felt really connected to the characters and was very close to crying at one point at a scene involving a friendship of Pixie's. I'm definitely intrigued enough to pick up the other two companion novels to this when they are both published in a few months' time!
Written by Michelle Fluttering Butterflies at 08:00