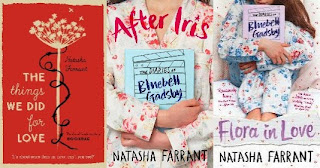 To find out more about Natasha or her books, do visit the following websites: I was born in London and still live there with my husband and my two teenage daughters. I have a brother and two sisters, I’m half French, I speak Spanish, I love travelling, reading and the cinema. I combine writing with my job as a Literary Scout, looking for English language children’s and YA books on behalf of publishers in other countries. My favourite food is smoked salmon on toast, my favourite drink is champagne, and my perfect evening would involve both of those and a good book.


My aunt. She’s an incredibly strong, hard-working woman who raised her two children alone, while also supporting her artist ex-husband, and maintaining a tremendous sense of fun throughout.  She is one of the toughest, most glamorous, life-loving people I know. She lives in the south of Spain and I stayed with her many times. She made all her morning business phone calls from her bed, smoking and drinking coffee and I wanted to be just like her. She’s the first person who made me realise what it means to take control of your life – that you don’t have to follow the path people expect you to.


Who do you look up to now?


People of integrity who are true to themselves and their beliefs.


I wanted to be self-employed (like my aunt) and a writer. And now I am both!


My family is full of strong, somewhat complicated women. But my aunt (the one above) said to me recently, “I have made a beautiful life”, and I think that is true of all of them. Through war and heartbreak, good times and bad, they have crafted beautiful lives, with home and family very much at the centre.  There have been terrible fights – epic, really – but always, also, so much love and such a sense of belonging.  It’s something I come back to in my books again and again.


Who is your favourite fictional character? And why?


It’s a hard call between Atticus Finch (who is true to his beliefs, see above) and Anne Shirley (see below).

Anne Shirley. No question about it. Because of her wild imagination and tendency to get into scrapes. Oh my god, I love her so much. I so desperately wanted to be an orphan and sleep in that bedroom and marry Gilbert.  I went to Prince Edward Island a few years ago and you can visit Green Gables! I wept when I saw it. I even bought an Anne hat (straw boater with red braids hanging down). I’m going to stop now before it gets embarrassing.


I was awkward, angry, obsessed with being cool and failing miserably at it. But I loved to lose myself either in books or on long solitary walks.  Both were very grounding and helped give me a sense of perspective on my really not at all miserable life.


Which book would you say that every teenager should read and why?

A difficult question, since every teenager is different (as my daughters keep reminding me).  I think, To Kill a Mockingbird because it tackles prejudice on so many levels, makes you question what is right and wrong, presents this amazing role model in Atticus, and also because it’s such an incredibly tender story about growing up and letting go.


All those people you think are so sorted are secretly just as insecure as you… Also, do more exercise.


If you could choose to have a girly sleepover with any fictional characters, who would you choose?


Apart from Anne? Lydia Bennet. Flora Gadsby, from my own books. The whole of Mallory Towers. Probably not all at once though, and assuming I was about 13.


I don’t know if there’s any one issue I like to read or write about.  I do feel there’s a real need for strong female characters who take on the world on their own terms – feminine without being vapid, strong without trying to emulate men, at ease with themselves and confident of their place in the world. That’s really important.

Thank you, Natasha!
Written by Michelle Fluttering Butterflies at 08:00