REVIEW: The Baby by Lisa Drakeford 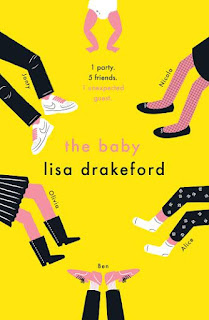 The Baby by Lisa Drakeford was an interesting read that covered lots of topics that I found fascinating.  Each of the five characters' stories were really interesting and I thought it was great how each character's story really builds on the overall theme of teen pregnancy/parenthood whilst also giving each character time to shine in their own right.

I found the structure of the novel to be quite unusual. There are five narrators in this book each of the five being people who have attended this 17th birthday party in which one of the guests unexpectedly (even to her!) gives birth to a baby. The rest of the story is the aftermath of this big surprise.

There is Olivia, the birthday girl. Alice, Olivia's little sister. Ben, Olivia's gay best friend. Nicola, the new mother (and Olivia's best friend.) Jonty, the father (and Olivia's boyfriend.) You can kind of see how there might be some conflict as the father of the baby is the boyfriend of someone else. And that there'd be obvious fall-out between the two best friends.  But what I liked about this book is that while this book is quite slim, there was quite a lot packed into it.  The exploration of these complicated relationships. Nicola (and Jonty) dealing with the fact that they are now teenage parents and what that means for their lives and futures.

Through the eyes of Nicola and Jonty we can see some of the reactions that other people have towards teenage parents which is quite sobering.  There is a lot of stigma and negativity surrounding teen parents which can be quite sad to read about.  For me, there was a bit of a disconnect between me and most of these characters, however, Nicola's adventures of being a new parent and caring for a newborn made tears come to my eyes. I knew exactly the frustration and fatigue and helplessness she felt as she tried so desperately to soothe a colicky baby in the middle of the night.

But I also found Alice and Ben's story lines very interesting in that they are involved in Nicola and her baby's lives and give support but they also share and we get to explore some of their own life problems.  Alice with her difficulty in finding friends and being different and Ben and his search for love. But it was definitely the domestic violence aspect of Jonty and Olivia that made me really intrigued by this novel. I found it an interesting topic to explore and I quite liked seeing Jonty's character development from the beginning to end.

The Baby was something a bit different and I really liked that!
Written by Michelle Fluttering Butterflies at 10:55