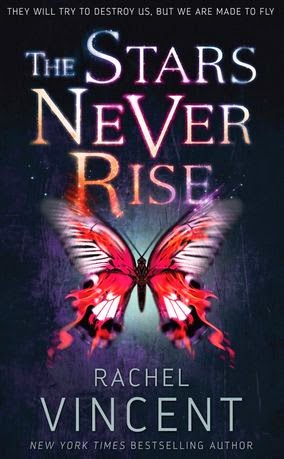 The Stars Never Rise by Rachel Vincent was so action-packed and fast-paced that in some ways I find it a little difficult to talk about it in any kind of meaningful way. I was reading this book and it felt like this mad dash towards the end in which I was furiously clicking for the next page on my Kindle and everything kind of whizzed by me.  It was an exciting read, that's for sure!

Without Rachel Vincent's name attached to this book, I'm not sure how excited I would have been. But it is Rachel Vincent and I loved her Soul Screamers series. They were emotional and surprising and every bit as fast-paced.  So these were my expectations coming into this first book in a new series. And The Stars Never Rise really managed to do everything I wanted it to do including set up this new story and world and populating it with interesting characters and relationships.

All right, so this new series. It's set in a future America in which there have been a plague of demons that have consumed many souls. And it was only with the help of an exorcist and a war waged by the Church that the war was won and the demons defeated.  Now the Church rules everything and there are few souls to go around.

Living in this world is our main character, Nina Kane. She is seriously struggling to keep afloat with bills and school and taking care of her younger sister, Melanie. The two girls live with her mostly absent mother, and are quite happy to do their own thing. Only doing her own thing has meant that 15 year old, Mellie, announces she is pregnant and it sets off this shocking turn of events that changes everything.

I don't want to tell you too much more of the story because that is really where everything switches gear into this fast-paced action-packed story in which Nina teams up with this band of bad-ass exorcists and wage their own battles against demons and the Church in order to protect both Nina and Mellie. There is a rather unconventional romance between Nina and one of the exorcists in this group who call themselves Anathema and I could not be more intrigued by how things will work out!

Speaking of the romance, ahhhhh! I loved Nina and Finn. But there is so much standing in the way of them being together. And the anticipation of all that drama coming our way in future books feels like delicious anticipation for me right now!

One of the very surprising elements of the story actually happens before Nina meets up with Finn and has all of these earth-shattering realisations about her family situation and the Church and everything she's ever known about demons and exorcists and the state of the media and the world in general. And the element of the story in which shows how far Nina will go to protect and feed her little sister was one of the things that surprised me about this book. Not the level of concern or love between the two sister but the lengths Nina went to. This book goes to some dark places, as witnessed with this scene early on and towards the end of the story in the final show-down!

I thought The Stars Never Rise was a fantastic, gripping and addictive story. Sort of like a demon, this book swept into my life and consumed me until I was finished and I loved every second of it. I love Nina's determination and her bond with Mellie. I loved all the members of Anathema from snarky Devi with an attitude to loyal Maddock. I can't wait to read more in this series.
Written by Michelle Fluttering Butterflies at 08:00