REVIEW: The Lost and the Found by Cat Clarke 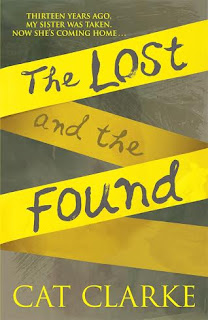 I have been very much looking forward to reading The Lost and the Found by Cat Clarke! She is a definite favourite author of mine and I went into reading her new book expecting something very emotional and that is definitely what I got from this book!

The Lost and the Found is a story about a girl who was lost ... she's abducted from her family and then returns 13 years later.  It was very much a story about families and about sisters and about missing children. I loved the exploration of the media portrayal in particular and how not every missing child has the same response.

The Lost and the Found is the story of missing Laurel Logan. How she was abducted 13 years ago and that returns to them after a very long time.  The story is told from the perspective of Faith, Laurel's younger sister and she is a wonderful narrator. Really showing the reader how difficult it was at times to live in Laurel's shadow and how difficult it was to transition into having a sister and sharing their family after such a long time.

My favourite aspect of the book is Faith and Laurel's relationship. That instant connection. That bond between the girls even though they've been separated for such a long time, it felt easy for them to become sisters. Faith takes it upon herself to let Laurel shine for awhile, to do things she would rather not because Laurel requested it.  I loved them together. They're not perfect or without conflict, but I really believed in their relationship.

I also really loved Faith's family. In particular, her father's partner, Michel.  I loved Faith and Michel's relationship and Michel was by far my favourite character. I loved that Faith had somebody like Michel in her life to talk to and be open with who isn't so intrinsically linked to Laurel's abduction. Plus he's French and makes macarons. Also, plus points for having both same sex parental figures and also a bisexual man.  Both need more representation in YA and I'm glad that Cat Clarke included both.

At the heart of this book, there is this underlying tension and I felt quite unsettled while reading that Laurel wasn't telling us everything. I was quite glad that a lot of her experiences while she was away were glossed over (and just because we didn't hear the gruesome details doesn't mean that the reader won't come away unsympathetic to her.)  But I also mean that Laurel's secrets put me on edge and I found it really interesting to go on this journey with Faith and Laurel.

The Lost and the Found was surprisingly emotional. In that, I didn't realise until that last page just how emotionally invested I was in this story, in these characters and in this relationship between Faith and Laurel!
Written by Michelle Fluttering Butterflies at 07:55