Have you guys heard of the Red Eye series of YA horror books from Stripes Publishing? I've been a huge fan of these books this year. I love the range of topics and the way in which these books scare in very different ways. I'm not a massive reader of horror stories but I feel like it's always fun to dip into a genre that I don't read every now and again just to shake things up with my reading.

And I just really love this series so far. As I said, there are different authors, different approaches, different topics. But all with these great, scary stories. The latest that's been published is Dark Room by Tom Becker. I have started reading it and what I have read I've really enjoyed but other things are going on right now which is why I haven't quite finished it. I will share with you the product description and also a fab extract to give you a good taste of what this book is like! Hope you enjoy.

When Darla and her feckless dad, Hopper, move to Saffron Hills, Darla hopes it'll be a new start for the both of them. But she stands no chance of fitting in with the image-obsessed in-crowd at her new school. Then one of her classmates is brutally killed when taking a photo of herself. A murder Darla herself predicted in a bloody vision. When more teens die in a similar fashion it appears that a serial killer is on the loose - the 'Selfie Slayer'. Darla alone is convinced that the murderer might not be flesh and blood... 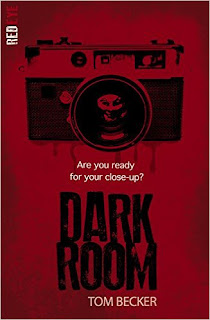 As Darla stared at the paintings, the bell above the gallery door rang out again.

The lights went out, plunging the gallery into darkness.

Darla froze, waiting to hear someone’s voice call out. But no sound disturbed the shadows. Lights went out all the time, she told herself, it didn’t have to mean that something was wrong. So why was her heart racing in her chest? Darla slipped into the adjoining alcove only to be confronted by the mirror Annie had shattered. Tiny fragments of her own face stared back at her.

As Darla looked into the broken glass, she felt herself being swallowed up by a mind that wasn’t her own. She was transported from one darkened room to another, where a girl with bright blond hair and a white tank top was slumped lifelessly in a chair. Her head was bowed, hiding her face. She let out a groan of pain, and Darla looked down and saw a knife in her own hand, blood on its blade…

A sudden sound wrenched her back to the present. Footsteps, soft as a breath. There was someone in the gallery with Darla. And they were trying very hard not to be heard. Had the person watching her in the mall followed her here? What did they want with her?

“Annie,” Darla whispered to herself. “Where are you?”

The footsteps were drawing nearer. Darla edged along the wall, drawing further back into the gallery. In the next alcove, the oversize doll’s house sat in the middle of the room. Darla crept over to it and opened up the front, pulling her knees up to her chest and squashing herself inside. In the darkness it would be almost impossible to see her without looking closely through one of the windows. It would have to be enough.

And then she heard a floorboard creak.

Peering out through the dollhouse window Darla could just make out a figure moving stealthily around the alcove, little more than a shadowy outline in the darkness. With careful, even steps they circled the dollhouse. A hunter’s stealthy tread.
Written by Michelle Fluttering Butterflies at 08:00