All right, so the other week I'm having lunch with my book club, which I do approximately every 6 weeks or so.  They're some of my absolute favourite people (more on my club soon, I hope!) so I'm quite comfortable around them.  Anyway, we're talking about possible future books to read and one of the books mention is something along the lines of Something Something Bucket List. And one of the ladies says that SHE has compiled her own bucket list of things to do including facing her fears and doing things she's always wanted to do.  And I told her ...I have a list like that too, only I call it my Happiness List.  I started telling her some of the things on my list and she did respond 'sweetie, that's a bucket list.'

...But I don't like calling it a bucket list.  A bucket list sounds too morbid for my liking.  I don't like the idea of doing anything because death is just but a moment away and I should get the stuff done because other the Grim Reaper will come calling. No, I prefer to think of it as a Happiness List because I feel like that's my goal: happiness.  Especially now where I feel like this year has sapped me of so much happiness.  The loss of my father, the loss of a close friend, other things that have been very emotionally challenging.  I think I need to inject happiness wherever I can.  So this list, which I've shared below are some of the areas I'd like to concentrate on or am already concentrating on.  I hope to write a little bit more on this blog about some of my experiences with these things! 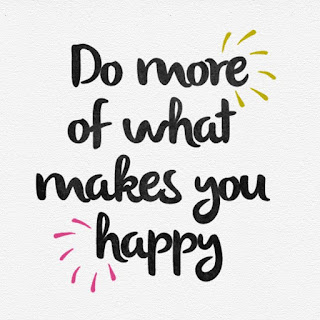 Job - Pretty self-explanatory, I need a job. I need one pretty desperately at this point!


French - Last year I completed the duolingo course for Spanish and this year I would like to complete the French course.  I find I love learning languages.  Who's to stop my from learning Italian or German next, eh?!


Piano - One of my biggest ...I don't want to say 'regrets' but I guess regrets is that I'm unable to play a musical instrument.  I've always wanted to learn and there's no reason why I cannot start now, right?


Lose Weight - I think since E was born it's been on my to-do list to lose weight.  First it was 10 pounds. Then I had another child and it became 20 pounds.  And then I recently checked my BMI (I know BMI can be wildly inaccurate but it's still a rough guideline) and realised I was 30 pounds heavier than the recommended weight for my height.


De-clutter - This one seems rather ...easy. Like something that could involve an hour's worth of time and a bin bag. However this is the most time-consuming item on this list perhaps.  Because what I mean by 'de-clutter' is really ...to put everything in its place in my house. To get rid of unnecessary things. To start and complete projects in the house. I'm making progress on this one but ...ugh. There's always something more, isn't there?


Origami - This is just a fun thing to balance out some of the more serious/hard tasks I've put to myself.  A friend of mine who works with the local library is into origami and I think there are classes held in one of the nearby libraries? I really should look into it more.  Origami was on my list of activities to do with the boys last summer but we tried it once afternoon and couldn't get along with the instructions we had. But with a little bit of guidance, I think it could be really fun!


Sew Own Dress - I think this one stems from this amazing Harry Potter dress that I bought once at Comic Con.  It's a fabulous dress and I love it. But I bought it and I thought 'I'd like to make my own dress like this' ...and I never have.  It's been on my mind for years.  Now is the time.  I have a book with some ideas and suggestions, I have access to a sewing machine and some knowledgeable friends and family who can help me out. So no excuses anymore!


Learn more - I'd like to learn more about subjects that interest me. Like history and art history.  I'd like to pick an area of interest and ...just go with it. Read up on it, be inspired.


Reading Blogging Booktubing - Reading and being a book blogger are two important elements of my identity. When my dad was ill and then when he died I felt sort of ...frozen. I felt unable to do the things I loved and I put them on hold.  But I like being a reader. I like being a book blogger and a booktuber.  I'd like to get back into and discover my love for these things again.  I'm on the right track and I don't want to push myself at all. But I hope slowly, with time, I'll get there. Fingers crossed.


Final Cut Pro - Recently (several years ago, actually) N and I bought a Mac. And one of the things we bought to go along with it was a version of Final Cut Pro that I wanted to use in order to make better booktube videos .... and I never quite got around to learning how to use it. And I should. I want to. I will.


Self Defence class - Since I was a teenager, I've been wanting to take a self defence class and yet I never have. I think it's about time.


Write - I obviously write a bit ... mostly blog posts on this blog. But I'd like to write more. Poetry. Possibly some short stories.  Something.

There are probably other things I should or could add to this list.  My happiness list has mostly been a shifting thing that I've juggled in my head.  This is one of the first times that I've properly written it down for my own record.

What would be on your happiness list?
Written by Michelle Fluttering Butterflies at 19:09