REVIEW: The Jungle by Pooja Puri 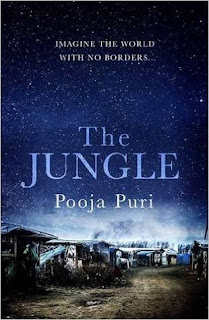 The Jungle by Pooja Puri was a really interesting read. It felt difficult to read at times but I also felt like it needed to be read.  Because this is a book about the Calais refugee camp.  And as we follow the main character, Mico, through his day-to-day struggles we get a heartbreaking glimpse into the lives and experiences of the refugees.

There wasn't much of a plot to The Jungle.  But I'm not sure it matters so much.  At the heart of the book is 16 year old Mico, who left his family and home in the search of something better, opportunities not available to him in his home country.  And what he finds is The Jungle. He's one of the youngsters of the camp, with no adults to protect him but he does end up sharing a tent with two adult men and the three of them do share food and look out for each other.

You get a good sense whilst reading The Jungle of what life is like in this refugee camp.  There are a lack of resources, the living conditions aren't great, there are too many people. There's almost a sense of hopelessness, a sense of resignation.  But there's also a spark there, a fire.  Mico is dead-set on finding away out of this camp.  And he'll try just about anything to be free.  At the start of the novel he's attempting to steal from the 'Ghost Men' who control more than they should of the movements of people within The Jungle.  Further along in the story, he attempts a deadly jump onto a moving train.  But it's the arrival of Leila and the subsequent friendship between her and Mico that really builds Mico's hope.

This book was definitely a difficult book to read. But I think my favourite aspect of the story is that through Mico's travels he comes across many different people all in the same situation.  With different backgrounds and all with their own stories to tell, with their own terrors and traumas that they're faced with.  And I thought it was important to be present and read such stories. Though the Calais Refugee Camp has since been shut down and the refugees have been resettled elsewhere this is still a very topical issue and concern across many countries.  And more needs to be done.
Written by Michelle Fluttering Butterflies at 08:00