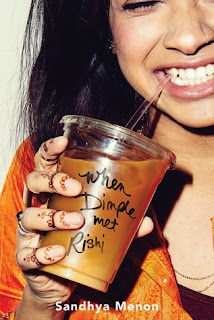 Never was there a more adorable book than When Dimple Met Rishi by Sandhya Menon. I heard it would be cute ...but until I read it I didn't quite believe it could be as cute as it was.  Believe the hype on this one, it really is hugely adorable.

I think the thing that really hooked me into reading this book is ... how on earth are they going to sell an arranged marriage in this day and age as something relevant?  I usually think of arranged marriages as something kind of outdated, something our parents might have done (and N's parents did have an arranged marriage!) So I thought Sandya Menon really had her work cut out for her trying to make Dimple and Rishi and the idea of an arranged marriage between two teenagers in the 21st century fit into this fun contemporary YA story believable.  And I'm absolutely sure that it was managed!  I just ...fell utterly and entirely in love with this story and I'm so glad that I've read it.

So this story is about Dimple, an Indian American girl in the summer before university who is about to head off to a summer programme for coders.  Her parents don't really get her and she's so shocked and surprised that they're so accepting of this summer programme but Dimple is just so grateful and relieved to be going to it that she just takes her parents' approval all kind of at face-value. ...Until she meets Rishi. And it all falls into place.  Because Rishi is the epitome of a Good Indian Husband that Dimple's mom keeps hinting at.  And when Rishi proposes there and then, Dimple reckons this summer couldn't get any worse...

I love, love, love this story. I'm not sure that I can convey that enough.  Because I love Dimple.  She's so driven and ambitious and she's working so hard to go against what she thinks is her parents' outdated concepts of being a woman and wearing make-up and needing a man in her life.  She's gone to this summer programme with the intention of winning and meeting her idol and getting a head start on what she really wants out of life: independence and a career she's passionate about. But ...being partnered with Rishi on a project means spending more time with him and realising that there's more to him than just being her mother's idea of Good Husband Material.

And I think Rishi is the highlight of the book for me.  He's definitely a bit of an enigma at first. He's really into the idea of an arranged marriage, and has traditional ideas of what he wants out of life.  But he's also kind and funny and says the most amazingly sarcastic things to people in such a friendly manner that it can be a bit misleading.  You can tell he wants to please his parents and his family and I love that with Dimple's influence Rishi is able to see that there are things he wants for himself too rather than remaining down the practical routes his parents have laid out for him.

This book was ridiculously cute.  It was funny, it was sweet and romantic. I loved the build-up in this relationship between Dimple and Rishi. I love that it's very much a romance story but also has a great stance on gender and culture and privilege.  All my love for this book!
Written by Michelle Fluttering Butterflies at 08:00