REVIEW: A Semi-Definitive List of Worst Nightmares by Krystal Sutherland 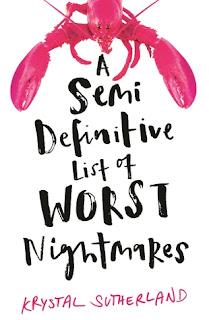 Oh I adored A Semi-Definitive List of Worst Nightmares by Krystal Sutherland.  Adored it.  And it was such a surprise of a book too.  You know how when sometimes a certain title or a specific cover design just speaks to you on another level?  That's what it was for me with this book.  I really had no idea what I was getting into when I started reading this book but something about the title and especially that lobster just really appealed to me and it meant I had to read it, just to find out what it meant.  And as I said, it was love.

I remember that I did read the synopsis of the book before I read it but I'm pretty sure I didn't really understand what was going on from the brief blurb.  And that's okay with me, I actually really love the idea of going into a story blind.  But if you're not into the blind-reading thing, then this book is about Esther and her family.  Esther and the Solar family believe that their lives are consumed by One Big Fear and that eventually each family member will die because of their fears.  Esther's brother's fear is the dark, her father's is agoraphobia, her mother is superstitious about bad luck.  Esther isn't sure what her Big Fear is yet but she still lives in fear and carries around a list of her fears that could potentially be The One.

Then one day, Esther gets pick-pocketed by Jonah Smallwood, someone she used to know in elementary school.  And despite this theft of epic proportions (he stole a fruit roll-up) Esther and Jonah become friends and Jonah ends up helping Esther confront her fears one at a time to show her that life is about more than fear.

I'm finding it difficult to put into words how much I loved this book.  It's very quirky.  Esther and Jonah and everybody who populates this book has their own little quirks and ways of speaking.  Esther is continuously dressing up in outlandish ways, her brother and their entire family are all just so ...different.  But I felt like it just worked within this story.

There's also a sort of magical realism vibe to the book, some sort of magical quality because of Esther's view of the world of the world, of her family, of the curse and her view of herself.  I loved the ways in which serious topics such as mental illness are discussed in this book and I thought that the story unfolded in a way that was both believable and hit the right tone.  I thought there were some fascinating characters in this book, some really sweet relationships and friendships.  And the Solar family will definitely be a family that I remember for a very long time.

But it's definitely Esther and Jonah that stole my heart in this book. I feel like reading this book all over again in order to spend more time with them, getting to know them both as they got to know each other.  I really do recommend this book.
Written by Michelle Fluttering Butterflies at 08:00