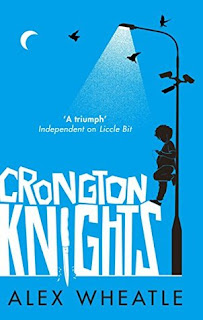 Oh why did it take me so long to read Crongton Knights by Alex Wheatle?! I loved Liccle Bit, the first in this companion trilogy, and was really excited to read more ...and it was only recently that I picked this one up.  It won't be as long until I read the third book, Straight Outta Crongton because I love these boys and their friendship and the ways in which Alex Wheatle brings this neighbour hood to life.

If you haven't read Liccle Bit, you needn't worry. Crongton Knights brings you up to speed with the events that occurred that are of importance before getting into this story.  This trilogy by Alex Wheatle looks at life in South Crongton on a council estate with gang warfare and rife with crime.  Crongton Knights, which obviously features the other boys, is McKay's story.

I adored McKay and getting to know him a little bit better in this book.  His mum has died and he's living with his dad who is working all the hours to try to keep the bailiffs away and his older brother, Nesta.  Meanwhile, Bit persuades McKay and Jonah on this heroic (knightly!) crusade into another neighbourhood in order to protect the dignity of Venetia, Bit's crush. While reluctant at the danger of such a mission, everyone does go ahead and, of course, things go badly wrong.  I adore these types of ...heroic journey-type stories.  It really puts pressure on McKay and the others to define who they are as people and what their friendship means to each other.  It was really quite sweet.

I think what I love so much about these books is that it really combines some great things together.  McKay is a wonderful main character, he's very relateable and I love his complicated family life with his dad struggling with former gambling debts and his older brother, prone to getting in trouble but very much looking for McKay so that he doesn't follow him down the wrong path.  I also think McKay's friendship with the other boys is lovely and the setting of Crongton is so well described that I feel like I'm there with McKay as I'm reading.  I'd say my only (slight) criticism is that all of the characters sounded roughly the same, even when it doesn't make much sense that a boy from private school and a refugee from another country both sound like the others who have grown up on the estate. But other than that, I fell in love with this book and these characters and I cannot wait to read the rest in Straight Outta Crongton!
Written by Michelle Fluttering Butterflies at 08:00