Have you ever read a book and then felt so inspired by it that you feel you just have to do something about it?  I have.  Recently, on a whim, I picked up Alex, Approximately by Jenn Bennett.  I honestly don't think I knew very much about the book before I started reading, but I like going into a book blind.  And it isn't the story so much.  The book is about a girl, Bailey, who moves across the country to live with her dad and spends the summer trying to track down an online friend, Alex, that she's been flirting with, only to start having feelings for her 'archnemesis' and colleague, Porter.  It's pretty cute and there's a Vespa and surfers and an odd museum and it was just the sort of lovely, romantic reading that I've been craving lately. 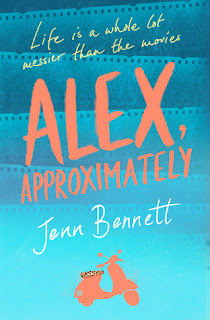 BUT! And here's where we get to the good part.  Because Bailey and her online friend, Alex, are totally into classic film.  That's what they bond over. They talk about meeting at the end of the summer at a local film festival to watch North by Northwest together. They talk about classic film actors and actresses, Bailey mentions one of her favourite films is The Philadelphia Story and so much of the book is littered with talk of all these people or films I've heard about ...but know nothing about.  Until now.

I so want to start watching some of these classic films.  I'm thinking if I can find the right place to find these films I might do at least one a week.  Perhaps more if I'm really enjoying them?  To broaden my horizon and to finally do a thing I've wanted to do for awhile.

Some of the classic films I'm considering, but please feel free to suggest others in comments or on Twitter. Or in person if you are lucky enough to see me in person, ha.  I'm going for a broad range of films and not just the romantic stories as this idea started off as!

North by Northwest
The Philadelphia Story
It Happened One Night
The Maltese Falcon
Bringing Up Baby
The Birds
Rebel Without A Cause (technically seen once, but don't remember)
Some Like It Hot
Miracle on 34th Street (1947)
His Girl Friday
The Big Sleep
Roman Holiday
The Grapes of Wrath
On the Waterfront
The 39 Steps
The African Queen
Rebecca
Citizen Kane
A Streetcar Named Desire
All Quiet on the Western Front
The Third Man


Have you ever been inspired by a book? Can you recommend a good place to start with classic films?!
Written by Michelle Fluttering Butterflies at 08:00

Email ThisBlogThis!Share to TwitterShare to FacebookShare to Pinterest
Labels: Books, contemporary, discussion fridays, simon and schuster, when books inspire, YA