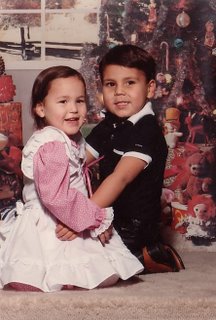 So, Happy Birthday to my brother David who will be 26 today. We're not close - I haven't seen him in years, we don't really talk to each other, and lead very different lives - but he's my brother and I do love him. I don't have any recent photos of us together, so here's a selection from when we were younger... When I was really young, it'd just be me following him around while he played with his friends, but because we spent a lot of our time together (on road trips, when our family lived in the middle of nowhere) we'd be forced together to amuse each other. So when we'd take really long road trips all the time, to combat the boredom we'd pretend we were dinosaurs breaking out of our (blankets) eggs or aliens or something. When we got older, and we were given sweets, David would always tell me his doctors told him he was dying and he needed medication (my sweets) to cure him - I always fell for it. I helped him write poetry to the girl he fancied, and he used to fight the boys who picked on me. We sang our answering machine message together (embarrassingly), and race each other on our bikes (he always won). He always some crackpot idea to make money (a lemonade/juice stand, washing cars, garage sales) and I'd always go along with it even though we managed things terribly. But when we got older, we both changed - me more so than him. I pulled away and pushed him out of my life. I hated that all the girls would rush up to me and say 'is David your brother, can I have your phone number' and actually, being known as 'David's little sister' followed me around until I changed schools. I 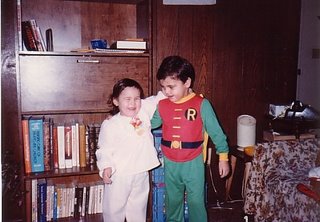 thought of him differently and thought we didn't share any of the same ideas, but I remember once, we were in the kitchen and I declared 'I'll never get married' (ha! I married at 18) and he said 'don't you want to have children?' and realised I was wrong. Years later, and he read Lord of the Rings and Clan of the Cave Bear because he knew I liked them, and when he heard I was in the hospital (when everyone still thought it was more serious than it was) he'd leave the room and ignore it, hoping if he didn't listen, it would all go away.
Written by Michelle Fluttering Butterflies at 11:27