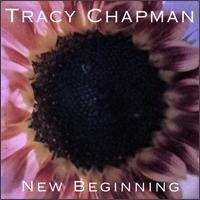 I keep forgetting to put music on during the day. You know when you're in a new place, all the normal things you do on a daily basis seem to be forgotten? Or is that just me? We're staying at my mother-in-law's place, and all of our CDs are somewhere, but it never occurs to me to listen to something, but for some reason this last week the astounding silence has gotten to me. So when I posted earlier about listening to the Buffy album, I seriously think that was the first CD I'd listened to in months. Anyway, today's CD is New Beginning by Tracy Chapman. I adore her. I'd never heard of her until I was in 8th grade, and one of the teachers announced that one of our assignments would be to enter into Tracy Chapman's songwriting competition... I had no inspiration for it and instead wrote a poem about my parent's divorce (did I write about this already) but Mr Caron thought it was for the competition and sent it in. I never did find out who won, and which song it was.
Written by Michelle Fluttering Butterflies at 12:20