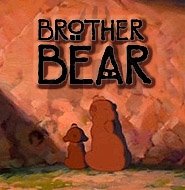 Sometimes, on a lazy Sunday, I like to watch (animated) Disney films or other films that make feel like a child again (like for instance, The Sandlot) but the thing is, Sunday afternoons I feel my absolute sleepiest, and almost everytime I get this Disney-film-watching urge, I fall asleep midway. It happened this last Sunday, just as I expected. I had just gotten to the part where Koda and Kenai (oh, heh. I didn't realise that was Joaquin Phoenix's voice) got to the salmon run, and dozed off. For hours. Which is actually the second time I fell asleep during it. I really don't remember how it ends anymore!
Written by Michelle Fluttering Butterflies at 16:39