The Culprit! Named and Shamed 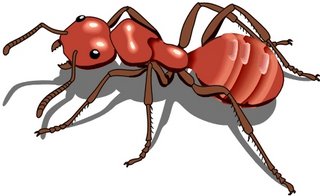 So, it turns out my attacker was the fireant. I had to go to the doctor today to get something for the unbearable itching for my poor inflamed and infected foot. I was telling my father about it over MSN messenger earlier, and according to him (who is prone to some slight exaggeration) when I was 2, and in Texas I managed to sit on a mound of fireants. He said there were close to 500 bitemarks and I could barely breathe. As he rushed me to a hospital he thought he was going to lose me. You know, even if he completely exaggerated the entire story (which is possible) I still love hearing stories like this. It makes me think, just for a second, that we were a normalish family when I was growing up.
Written by Michelle Fluttering Butterflies at 16:55