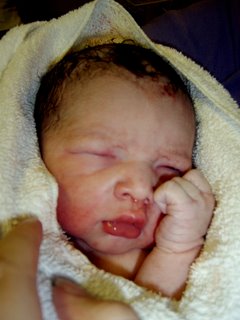 I've seen quite a few people celebrate first birthdays by writing the child's birth story. And I'll share mine with you, as long as no one hates me because my labour was short. Deal? Deal. I'm posting this on the 27th for a good reason. Elliot was born at 12:05am on 28 November 2005. Most of this story takes place the day before...

On that Friday before I became a mommy, N and I and some friends of his from work went out for a nice Indian meal. And no, I did not eat anything spicy, this was not the reason Elliot was born more than a week before his due date! :) We had a good time, and I'm glad we had that last night-out together before everything kicked off. That morning, about 3 o'clock I woke up and couldn't get back to sleep. I went to the toilet and lost my 'plug' And after that, I was just so excited.. I knew things were starting. I got back into bed and woke up N. He smiled, asked a few questions and went back to sleep. I got up a few more times, dozed off and on. Things were going on in my stomach - my body was getting ready for labour. It lasted all day, these minor tremors, period-type pains. I tried not to work myself up too much, it could still be hours if not days left. There was a brief period of 'oh god, not in November' feelings, but not too much.

Sometime in the afternoon, 1:30 maybe, I thought I'd passed a bloodclot. It looked about the size of a 50p coin, so N and I went to the hospital. I was given an internal examination, and the midwife told me that my waters had already broken (I wasn't aware of this) and that the bloodclot was more likely to be a piece of the placenta that had broken off. She said that she'd do a 'stretch and sweep' because I had to have this baby within 24 hours now that my waters had broken. Seriously, this was THE worst part of my labour. That stretch and sweep was AWFUL. I went home and willed my baby to come out soon. I hated the idea of being induced. I was sent home.

Not much happened for the rest of the afternoon. My husband and I agreed to go stay at my mohter-in-law's house that night in case my labour started during the night. Off and on the minor contractions went on, but nothing was regular, everything was erratic. Everytime I thought we were following a pattern, I wouldn't have a pain for 10 or 20 minutes. I repacked my labour bag, with all those essentials they'd said I'd need. Music, magazines, nibblies. I tried to take a bath and walk up and down the stairs. Still nothing.

When we made it over to my mother-in-law's house it was just before 8 o'clock. I asked my husband for his watch to wear so I could time my contractions which were coming on stronger. At 8 o'clock exactly I started timing my contractions that were a few minutes apart and lasted for about a minute. I waited for an hour to make sure it was real, and interrupting some programme N was watching, we went to the hospital.

When we arrived, we were shown to the labour ward, and my midwife told me they'd strap on the fetal monitor for 20 minutes and come back to check on me. It seemed nearly 45 minutes to an hour before she came back. N and my mother-in-law kept asking what they could do to help, but the contractions just kept getting stronger and stronger, and I kept turning up the dial on my TENS machine. I'm a pretty big baby when it comes to pain, I wasn't ready for this.

When the midwife came back, she said she'd need to do another internal examination. She sent away my husband and the MIL to the waiting room. She gave me my first taste of gas and air while she checked me out. I didn't let go of that nozzle for the next few hours. Gas and air was definately my friend that night. But the thing is, it made my head all fuzzy. She'd be asking some important question, and I just couldn't register it. The contractions kept coming one on top of the other, it was awhile before I could even manage to say anything, but I wanted my husband. Things were getting serious, and he was still in the waiting room. The midwife was telling me that my baby's heartbeat was dropping, they might have to take immediate action. I asked for N. She said she'd get him as soon as she put in an IV thing in my hand in case I had to have a caesarean.

By now it felt like hours had passed, but in reality it probably hadn't. N said later that he was so scared for me. He'd heard screams from the other labour rooms and it sounded like the women were being murdered one by one. When the midwife came to get him, he thought something terrible had happened to me. Everything happened so quickly - I kept breathing in the gas and air like my life depended on it, and sometimes I'd suck in too much and forget to suck again and get hit by the pain of the next contraction. There was no time for different positions or the music. There was no time for back massages or time for my head to adjust to the fact that I was having a child.

Before I knew it, the doctor or midwife, I can't remember which asked me to do the two most difficult tasks to date. The first, was to open my eyes. I just couldn't. Finally, when I did - N was right beside me and I knew it'd be OK. The second, was to put my legs on those awful metal stirrups. It took a few minutes but I finally managed them both. They took away my gas and air and said for this last part I couldn't rely on that to do the final pushing.

With every contraction, my boy's heartbeat was dropping. He was in distress. They said I did great with the pushing, but he needed to be out immediately, so for the final part - they pulled him out with the ventouse. There were so many feelings coursing through me once he was born. I always knew in my heart that I was carrying a boy, but once he was born, I needed to hear 'it's a boy' and no one said it. Until finally, I asked. N said 'he's a boy and he's beautiful' The umbilical cord was wrapped around Elliot's neck, so N never got to decide if wanted to cut the cord or not, and Elliot didn't cry immediately. When he did, I needed to hold him right then, and once I saw him I felt the tears spring to my eyes.
He was so different to what I expected - with his red, wrinkly skin and those gorgeous pouty lips. I fell in love right there. N said later he looked like an alien, and he was right in a way. :) But he'll always be my alien. It took 4 hours and 5 minutes exactly for my little Elliot to be born.
I love you son. Happy birthday one day early.

Written by Michelle Fluttering Butterflies at 10:34