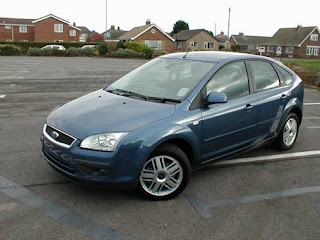 Hey look! We bought a car. Apparently the Ford Focus is one of the best secondhand cars to buy. But I seriously know nothing about cars. I was more interested in the colour and if the car had rear speakers (our other car doesn't and I can never hear the music in the backseat!) This isn't the actual car we bought, just one that looks similar to it. Do you know what this means though? That we have two cars. In a household with two adults. Which means one car per person. I'll have to start driving soon. Good thing it was one of my new year's resolutions.

Let me first apologise to Tasha - she asked a direct question about why I'm afraid to drive and I never responded (sorry!) I have blogged before about it, but it was too long ago. I never learned how to drive in America, I didn't have the desire to. Other people took driving lessons through high school or whatever, I was not one of them. My dad mentioned it once, but when I never brought the subject up again, neither did he. I don't know if it's entirely relevant, but when I was a lot younger I wrecked some woman's go-kart track, and since then my family have always told me I'd be a terrible driver, that they wouldn't want to be in the same car with me. I know it was originally meant as a joke, but it went too far. When I first started driving, I had no confidence in myself. Almost four years ago I started my driving lessons here in the UK. It took me over a year to get to a point where I was considering taking the driver's test. I was so unsure of myself that it held me back. I failed my first attempt (and rightly so - I didn't realise when I was parallel parking that I'd mounted the kerb and nearly hit a tree, I almost hit a cyclist and once pulled out without looking) but the second time I scraped through with the maximum amount of penalties that would still allow me to pass.

I've never driven on my own, even though it's been three years in April that I've had my license. The reason? The responsibility is too much for me. I'm afraid I will seriously injure, not myself, but someone else. I'm afraid of some accident where my son, a pedestrian, a cyclist, another driver, anyone will be hurt because of me. I couldn't live with myself. There are so many risks and so many things that could happen. So much is going on at the same time. Who knows, maybe it's just that I haven't driven enough to feel comfortable. Maybe I just need to spend more time behind the wheel, have more confidence in myself. And I'll have to. Wish me luck.

*******And on a lighter note, Lindsay who did an awesome job designing this template for me, is having a contest to win a free template - head over here and join the fun and win one for yourself! I expect everyone to answer number 9 correctly!
Written by Michelle Fluttering Butterflies at 10:46