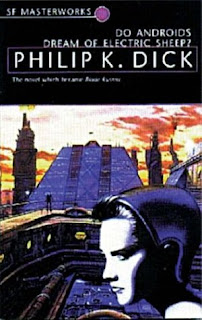 It has been a very long time since I've blogged about the books I've been reading, and that's because I haven't been reading. It's been a weird few weeks without books, and I feel somewhat ... lost, but I can't bring myself back as yet. I don't know how to explain it.

But I did read this, one of my Dystopian Challenge books, Do Androids Dream of Electric Sheep? by Philip K. Dick awhile back. It was OK. I didn't love it, I didn't hate it. It's the book that Blade Runner was based on, and while I know I have seen the film, I don't remember the details so I went into reading this book without much of an idea of what it was about apart from the fact that it was set in a dystopia. I hadn't read anything by Philip K. Dick before, and possibly this wasn't the best book to jump in from?

It's about a bounty hunter in a future covered in radiactive dust where having a live pet is the ultimate symbol of prestige and all animals are sacred, even spiders. Rick Deckard is set the task of 'retiring' 4 androids living amongst other humans. To be honest, here's where I get quite confused with the story. I understand that Deckard questions his humanity in killing the androids, especially after his encounter with a beautiful android, Rachel. But I didn't get the significance of Deckard's depressed wife, Mercerism, the 'chickenhead' character. Maybe I wasn't as involved in the storyline or the characters as I could have been, but it all just baffled me. The writing was easy enough to read, and I sped through the book quickly, but I didn't take in much of it unfortunately.
Written by Michelle Fluttering Butterflies at 16:47