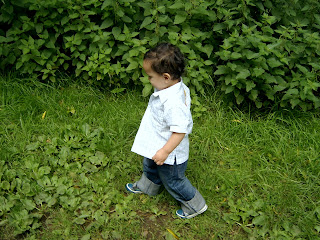 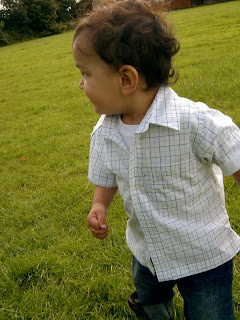 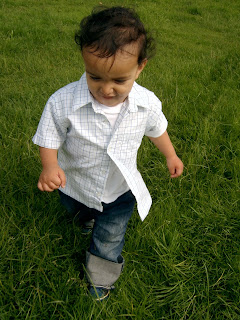 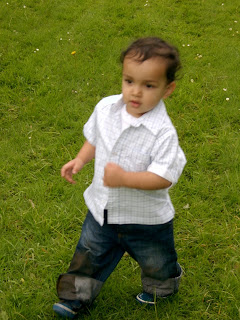 At Elliot's toddler group this morning, he participated in Barnardo's Big Toddle - a charity event raising money for vulnerable children in the UK. And you know me, people, anything for charity.

But oh how I did regret joining in... It was meant to be a nice quick 'toddle' in a nearby park. Like an ass, I just ASSumed that the walk would be paved in some way, not just trodding all over marshy grass. But seriously - half a mile with Elliot was absolutely painful. 10 feet into the walk, he started a tantrum as I tried to lift him over a massive puddle, and instead fell into it. He grabbed a stinging nettle, tried to run into the river, stopped three times to sit and pick flowers, veered off into some trees and got scared by a man walking his dog. I had to carry him the last bit as he starting crying because, yes, we were the last ones out there. I just had to keep repeating to myself, 'it's for charity, it's for charity' as his muddy shoes smeared all over my favourite pair of jeans.

But you can see he enjoyed himself, right? (And if anyone would like to sponser Elliot, send me an email or give me a call.)
Written by Michelle Fluttering Butterflies at 12:19