What? Did I forget to mention... 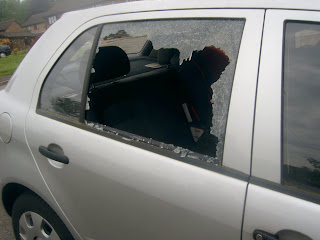 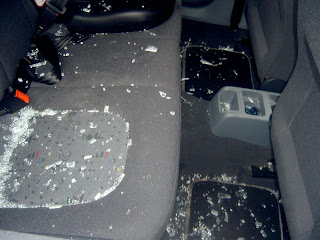 ...that my car got broken into the other weekend? Oh, it did. But nothing was stolen. No, apparently some teenagers broke the window just for the hell of breaking a window. Two other cars were vandalised in the same way on the same night. A neighbour witnessed it and phoned the police - who didn't show up until much, much later. And as far as we're aware, are not doing anything about the matter. Lucky us.

Sadly, this is just the latest in the misfortunes of my poor little car. It was bought brand-new in 2002. Then I decided to learn how to drive in the thing, and put a huge dent in the front bumper trying to reverse out of our garage. Then N decides to leave it outside the house one night (the only night EVER) and the other bumper is dented. Then it's left undriven for awhile, the battery goes dead. We fixed it. Then the battery goes dead. And again... and then finally replace the alternator. Oh dear. I feel a little sorry for it really, it's been so badly mistreated.
Written by Michelle Fluttering Butterflies at 07:54