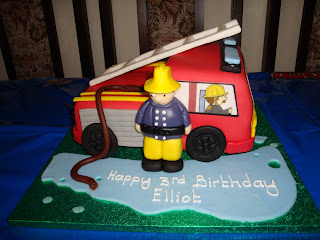 We held Elliot's birthday party at our house on Saturday. We did have to limit the number of guests being at our house but we thought we could squeeze one more party in before we had to hire a hall. We always have too much food and too many decorations, and Elliot was absolutely thrilled so all the work and effort we put into it was definately worth it.

There was just one thing that annoyed me that day. And I will admit to crying. One of the mothers of the children we invited called up ONE HOUR before the party to say her son (Elliot's 'best friend') wasn't feeling well and they weren't going to make it. Oh I was annoyed. A mutual friend told me the day before that this boy was not feeling well earlier in the week, so why didn't the mother call me a few days beforehand (even the day before!) and say 'T is not feeling very well, if he still isn't better by Saturday, we won't be able to make it' or even Saturday morning when T has obviously woken up still not well, why not call me then? Why not do both? Why call an hour before the party to cancel? Why?

This is Elliot's best friend.. he had been saying 'T is coming to my birthday party' all week. If I'd known, I'd have prepared Elliot beforehand that T might not be coming. So, yes, I did start crying, thinking about Elliot being disappointed (god, I hate it when my child is disappointed or let down by other people), but then N came home and said not to be upset when other people do not live up to our own high standards. And I did feel a bit better and truthfully, Elliot was fine about T not coming. He danced and laughed and ate and had a great time. Me? I'm still slightly annoyed. Do you think I overreacted? What would you have done?
Written by Michelle Fluttering Butterflies at 11:20

Email ThisBlogThis!Share to TwitterShare to FacebookShare to Pinterest
Labels: Elliot