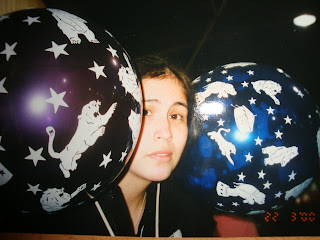 Here's the thing. N and I met on the Internet more than 10 years ago now. We spoke over the Internet and on the phone for an entire year before he flew (from London) to see me (in Eugene, Oregon). We had a great couple of weeks at the end of December 1999, and then he flew away again. And I got to thinking that it was all a dream. That it was good to be true, that I didn't deserve happiness or love. I got to thinking that a long-distance relationship was too hard and too much. So I broke it off with him. But he didn't accept it at that. Even though he'd only just flown out to see me two months before, N flew out again in March for a week.

As soon as his plane landed in Eugene, things went back to the way things were when he'd visited in December. We spent our days hanging out at Borders or painting pottery, seeing movies and enjoying ourselves. But during that week, it was also his birthday. His .. 24th, I believe. So I took him to the circus.

We went to a semi-nice Italian restaurant for lunch, and I wore my favourite shirt. I had that shirt for years and I seemed to always wear it on birthdays, his or mine until it got too small. We bought balloons at the circus and I was so excited and happy to be there with him that I was running around waving the balloons everywhere. When we sat in the bleachers to watch the festivities, he dropped his bag and his camera broke. Or was that somewhere else?

He took this picture of me with the balloons, I think he surprised me with it, which is why I'm not smiling. I like the colours of it. Blue and purple ended up being our wedding colours. We have another picture someone else took of us on that day, both sitting on the elephant, but there's no point posting that picture as no one can tell it's us on an elephant. It just looks like us. They told us the name of the elephant we were riding, but I don't remember it. N might, he's good with stuff like that. The elephant just took us up and back again, one length of the huge warehouse thing we were in. N has one arm over my shoulder and I'm wearing my Claddagh ring. Afterwards we went to this bookstore in downtown Eugene. There was a big book on astrology there, and I looked up N's star sign and read the description of him. It was unbelievable how accurate it was. I may have bought my hardback copy of Gone With the Wind at that time, but it could have been a different time, different trip.

But we rode on an elephant.

After posting this list a couple of weeks ago, egan asked to hear the story behind this and two other things. I wonder if this is the story that you'd thought you'd hear about when you asked the question? I'll answer the other two very soon, I promise.
Written by Michelle Fluttering Butterflies at 06:40