Doing Something Different: Days 2 and 3

It's been a rough few days trying to work on my latest assignment for university. The time I had to write two essays, the first on the general formation of identities and the second on how race and ethnicity impact the formation of identities. I'm not feeling as confident with these two essays as my last. Wish me luck, both essays will be sent off to my tutor tonight.

Back to Doing Something Different. If you missed it, here is my account of Day One. 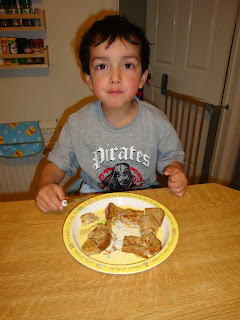 For day two, I really needed to stay close to home. Oldest had an Easter party at toddler group that morning which led to me rushing home to force food into his mouth for lunch before pre-school in the afternoon. It left very little time for even my rainy day activities (baking or arts and crafts) so yet again I took the easy option and went for cooking my boys a hot breakfast.

We're very much a cereal-for-breakfast family. Breakfast options are usually limited to cheerios or rice krispies. An apple or a banana. Milk or juice. Special occasions involved toast with jam. Very exciting stuff. I always mean to spend a little more time over breakfast, but it's usually a pretty stressful event, getting things prepared for the day, getting everyone dressed and washed and everything. Plus, for awhile there, Oldest was very resistant to change. I remember I spent a great deal of time making muesli on day and letting it soak through overnight to find that Oldest insisted on corn flakes and only corn flakes the next morning.

But I thought I'd persevere and went with French toast. Very simple and easy to make. I'd heard suggestions of cutting the bread into shapes with cookie cutters beforehand but I couldn't find my cookie cutters that morning. Oldest and Littlest adored them. Seeing Oldest finish his in record time and ask for me just made me feel incredibly guilty that I hadn't made it before. We're turning the French toast/hot breakfast into a weekly routine. It has to be done. 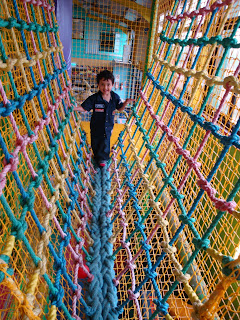 Day Three was a bit of a disaster. I had good intentions. I decided to take the boys to a local softplay area called Monkey Mates. I thought it would be especially good seeing as how Littlest has taken to climbing onto the sofa on his own. Oldest has been on a few occasions, but not in the last year. He loves slides and Monkey Mates claim to fame is having this tremendous big slide in the middle of their climbing frames. We've only ever been on the weekend when N was with us, so I was a bit nervous looking after the both of them. Oh boy. Things were not good.

Oldest enjoyed himself at first, but kept rushing off to climb different bits and I was left behind with Littlest trying to keep him happy and keep an eye on Oldest at the same time. First thing that was terrible, was that the place was filled with childminders all grouped together gossiping while the kids they were meant to be watching were running wild. I'm all for a good chat with friends but not at the expense of any kids getting knocked over or allowing MY child to push or throw balls at the younger children. I was not happy with that. 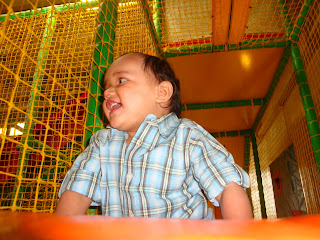 The second thing that made the day not the greatest was that somehow Oldest has managed to acquire a fear of heights. When did that happen? With Littlest to look after, I couldn't take the time to coax Oldest into doing the things he was afraid of. He wouldn't go near the larger slides. Poor child. Littlest enjoyed himself climbing around, but everything was a bit too advanced for him. He didn't like being kept in the babyish area and wanted to explore other areas and I just couldn't let him with the wild children on the loose and things were just a bit too high.

Oldest and Littlest both enjoyed parts of the morning, as did I. I'm not sure but I'll make a return trip to Monkey Mates soon. I did think it would be fun but can't win them all.
Written by Michelle Fluttering Butterflies at 17:10