The Sunday Salon: When Books Inspire 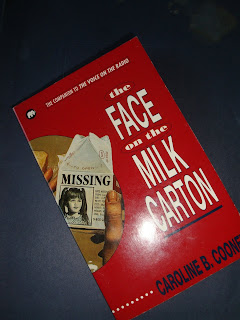 I recently had an idea to read books from my childhood. I've challenged myself to read two a month for as long as possible. I chose to read The Face on the Milk Carton by Caroline B. Cooney as the first book in my walk down My Favourite Childhood Reads because it actually inspired me to begin my own novel. I must have been 12 or 13 when I read this book first. I think I bought it myself from own of those children's book fairs they hold at school. I've read the sequel, Whatever Happened to Janie? but HAD NO IDEA there is a third book called The Voice on the Radio. (I'm devastated. I am now desperately trying to locate The Voice on the Radio!)

It's been a long time since I've read this book. I remember being swept away by it the first time, but I am a lot older now. And as I started it this time around, I was all about making fun of it. The first chapter is all about names, and how the main character 'Janie Johnson' doesn't like her name. She tries to tweak her own name while writing an essay and ends up with Jayne Johnstone, decides that's not quite enough, and goes with Jayyne Jonstone, etc etc. She moans a bit about her parents' boring choice of a name and even remarks 'they could have named her Scarlett or Allegra. Perhaps Roxanne.' Which kills me. She then envies a bit on her friends' names and there's a bit about what she was fantasizing about naming her own children (Denim and Lace) which is all a little hilarious to me.

Then we get to the more serious stuff, in that, she sees a little girl on one of those Missing ads on the back of a milk carton at lunch, recognises herself and starts having flashbacks that don't make sense and starts asking questions and doing some investigating of her own. Meanwhile, she starts a relationship with hunky next-door neighbour, Reeve. There is a lot to laugh about in the writing style of this book, but once the story got going, I totally did get swept away again. I didn't even snigger at the silly inclusion of a Hare Krishna cult in the middle of the story. Nope, I just carried on like that was perfectly acceptable.

I managed to finish the story late at night when I should have been sleeping. I was even a little disappointed that I didn't have the sequel to hand. I'm not saying I'd recommend the book to anyone, but it was easy to remember what I liked about the story itself. I liked Janie's struggles with her morality. She finds it hard to forgive herself for walking away from her family for a stranger with an icecream. Even though she was only three. Plus, I always had a next-door neighbour fantasy. I liked Reeve.

Anyway. I had fun reading this one. It was nice to indulge in a little nostalgia. To my story then. I mentioned the bit at the beginning about names because naming characters was very important to me. And me at 12 agreed whole-heartedly with Janie. 12-year-old-me was very much into the soap opera names. I'd even go so far as to say that 12-year-old-me was very into the soap opera-esque story lines as well. Let me summarise the plot of my story for you here. This is completely based on the line in The Face on the Milk Carton where one of Janie's friends is trying to explain why there are so many kids on the back of milk cartons:

'All it is,' said Pete firmly, 'is divorce, where one parent gets mad and takes his own kid, but he doesn't tell the other parent where they're going. It's never actually a stranger stealing a kid, like on television.'

And just like that, a story idea popped into my head. About a girl, 14, who lives with her dad somewhere. She's been led to believe that her mother died when she was little but comes to find out that is not actually the case! She sees a programme on TV (couldn't use the milk carton idea!) calls a number and before you know it, she's back with the mother she hadn't seen in more than 10 years. Around this time my own parents were going through a divorce so I channelled my feelings for that and had many an argument with my main character and her father regarding his new girlfriend.

And of course, because I was absolutely boy-crazy then, there are heaps of boys tripping over themselves for the attention of my pretty and witty and smart main character. And they all had fabulous names. For example, my main character has two names. Her name when living with her father is (don't laugh too hard here): Francesca Eleanora Smitsgerald. Frankie, for short. She comes to learn the name she was born with is actually Francis Elena Simms. She's heartbroken to have such a boring name in comparison. Her best friend's names are Blair Torrence and Zora Birch. The boys circling around her like flies are called: Aaron Archback, Matt Richardson, Jeff Thorny, and Roger Cunningham.

I wrote 20 pages, front and back, about the adventures of my little Frankie. I had everything planned out in my head, I had my characters all formed and ready, but I never got to the main bulk of the story. I dithered over the minor details. The school where Frankie goes, meeting a new family in the neighbourhood, describing a winter formal dance. And where I stopped? A particularly bad argument that Frankie has with her father. It was after this that she sees the TV programme about missing children and decides she'd rather not live with her dad anymore and calls the number on the screen, effectively changing her whole life. And at the time, I wasn't ready for it. I couldn't get past my own emotions of my own circumstances to carry on with this soap opera. So I never did.

But it has been fun to laugh about it all now. The horrendous names, the boys. There's even a little scene where two boys fight it out a bit over Frankie. The new family in the neighbourhood? Total rip-off of Flowers in the Attic by VC Andrews. There's five children, they're all blonde, all have names beginning with A and there are even little twins.

It was all a little funny and sad to read the things I had written at that age. I tried so hard to write through my issues. It may have helped in some ways, but in other ways here I am 15 years later working through the same things just in a different format. I wish I'd carried on writing my fiction. I wrote all the way through high school, had these daydreams about being a successful novelist when I grew up. I think that's still possible, but unlikely at this point. My heart isn't in it like it was as a teenager. And I'm more sad at the fact then you'll ever realise. But I am quite glad that I was able to read books that inspired me, even if they didn't pan out exactly how I pictured it would.

How have you been inspired by reading?
Written by Michelle Fluttering Butterflies at 14:52