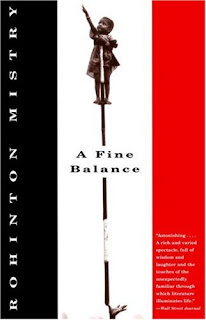 I've had my copy of A Fine Balance by Rohinton Mistry for many, many years. I bought it while still in America, in fact. It was a book that I carried with me in my suitcase when I moved here 9 years ago. At the time I was reading all of Oprah's book club picks, but until very recently I don't ever remember even cracking the cover of this book. I'm sad now that it took me so long to read this beautiful book.

A Fine Balance is set in India around The Emergency, a period of time in the 1970s where a lot of freedom and choices were eliminated from the common people as India struggled with political unrest and the economic times were hard. This book describes in detail a lot of the unjustices and abuse that went on during this time. And it's very heartbreaking. As one character points out, 'it's a fine balance between hope and despair' And these characters really are walking that line, dealing with such atrocities. Police corruption, forced sterilisations, whole neighbourhood's homes knocked down to 'beautify' the city.

The four main characters include Dina, a woman in her 40s who is struggling to remain financially independent after the death of her husband. In order to do this, she takes in a lodger, Maneck, who is a sensitive student living away from his home, and also hires two tailors, Ishvar and Omprakesh, both of the 'Untouchable' caste. I think what's wonderful about this book, apart from opening our eyes to the cruelties of life during this time, but also how many different topics are touched on during the scope of this novel. The four main characters are all very different from each other in terms of gender, class, religion and over the course of the book transform from people unsure and untrusting of each other to becoming friends, family even. Mistry manages to say something about the true meaning of families and community and loyalty as well. He gives us a sympathetic view of beggars and shows us the power that lies within the human spirit.

It really is a heartbreaking book. One not to miss.