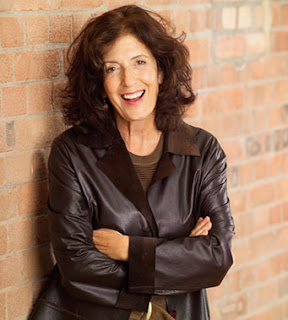 In 1989 students protested in Tiananmen Square, the Berlin wall came down, George Bush began his first term as the president of the USA and I became a vegetarian. Although I don’t confess for one moment that my turning vegetarian compares to the preceding world events, for me it was life changing and it was all because of the influence of one lady, Anita Roddick.

Anita Roddick first came under my radar as the founder of the Body Shop. In the eighties, the Body Shop was currently in vogue. The concept of toiletries and cosmetics not being tested on animals and refilling your containers after use, was considered to be radical and new wave. So radical in fact, it took a while to reach my neighbourhood, but when it did I was hooked. Every time I hit the shops, the smell always enticed me to go in and try any new product they had in store. Turning vegetarian was just a further concept of the work Anita was putting in to reform the UK - I used toiletries not tested on animals, so why should I eat them? It was as simple as that. I turned vegetarian almost over night and I still remain one to this day.

When Anita released her auto biography, Body and Soul, I devoured it and it influenced me greatly. I began to wash (my very) long hair in a small sink to conserve water and her techniques of reusing paper is still firmly imprinted in my brain. Her maverick ideas of what the world would look like in twenty years time and how we as humans are destroying the world in which we live in, is something that is high on people’s agendas today. Yet twenty years ago, when Anita campaigned for a better world, her ideas were deemed as radical. 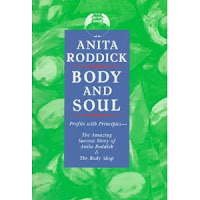 Anita was definitely a pioneer in terms of human rights and environmental issues and twenty years later, her ‘radical’ ideas and concepts have affected me strongly in how I live and view the world.

I read about her death in the newspaper and the first thing that sprung to my mind was sadness, that I hadn’t had chance to meet this great woman and tell her what an effect she has had on this girl from Nottingham.

A HUGE thank you to Janette of 40 Things To Do Before I'm 40 for this wonderful guest post about Anita Roddick! When I sent out an open invitation for guest posts on the women that my blog readers are inspired by, I had no idea that people would actually want to take part!

And Janette is actually someone who really inspires me. I've been reading her blog now for awhile where she chronicles her successes with her rather ambitious list of (just what it says in the title) 40 things she'd like to do before she turns 40. Skinny dipping, learning a foreign language, owning a pair of Jimmy Choos, and surfing amongst others. It's a very diverse list and she really didn't go with easy options either.

I'm always on the look-out for ways to improve and make my life more interesting/better and instead of just thinking about it, Janette seems like she's actually doing it. Thank you again Janette!

And while I've heard of Anita Roddick before this, I didn't know much that much about her. I found this post to be fascinating - I had no idea that she was so keen on environmental issues, so thank you for the education! :)

If you're reading this and thinking, hey I know an awesome woman who inspires me and would like to write a guest post to be featured on my blog, you still can, if you like! Leave a comment with your email address or email me!
Written by Michelle Fluttering Butterflies at 12:05