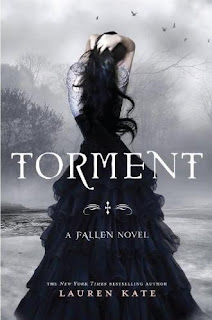 Hell on earth. That’s what it’s like for Luce to be apart from her fallen angel boyfriend, Daniel. It took them an eternity to find one another, but now he has told her he must go away. Just long enough to hunt down the Outcasts—immortals who want to kill Luce. Daniel hides Luce at Shoreline, a school on the rocky California coast with unusually gifted students: Nephilim, the offspring of fallen angels and humans. At Shoreline, Luce learns what the Shadows are, and how she can use them as windows to her previous lives. Yet the more Luce learns, the more she suspects that Daniel hasn’t told her everything. He’s hiding something—something dangerous. What if Daniel’s version of the past isn’t actually true? What if Luce is really meant to be with someone else? The second novel in the addictive FALLEN series . . . where love never dies.

I read Fallen earlier on in the year, and while I liked it, I felt it was a little slow to get going. I wasn't quite sure about Luce and Daniel, but I wanted to believe in them as a couple. While I was reading Torment the sequel to Fallen, I changed my mind pretty quickly.

In fact, I got a little annoyed while reading Torment. Daniel seems a little too eager to leave Luce powerless and ignorant, and those aren't really qualities that I like to see in a love interest. Why all the questions unanswered, why not have a little more faith in what Luce can and cannot handle? How about a little honesty, Daniel?

By this stage, I was really past my limit of paranormals anyway, so it wasn't the best time to have picked up Torment. I wanted Luce to grow herself a backbone and demand some answers, be a little less co-dependent on Daniel. I rolled my eyes at Luce and Daniel's agony over being apart for a measly 18 days. It's not even three weeks, folks, buck up. So this is where I'm at after the first 100 or so pages.

And then things start to change and be less annoying for me. I'm wondering if Lauren Kate meant for things between Luce and Daniel to be annoying? She's sent Luce off to a special school for nephilim and let her make some funky friends in the shape of roommate Shelby, gain a different perspective with her demon-teacher, Stephen and ... there's possibly even *gasp* a non-Daniel love interest? Can it be so? And at the same time, Luce is still a little shaken over the events that happened at the end of Fallen and she decides to make some of her own changes.

While I did find Luce to be a little slow in terms of realising how much danger she is in now that she's involved in this power-struggle amongst angels, she does try to learn things on her own and I have to give her credit for that. She begins to realise how her relationship with Daniel has affected those people in her life and decides to track down family members of previous lives. With the help of her roommate Shelby, she risks a lot for some answers.

By the time, the explosive ending happened, I was fully rooting for Luce. The ending made really changed my mind about the whole series and I am honestly on the edge of my seat waiting for the next book in the series. I hear it's a prequel, which sounds very interesting, is also a little aggravating as I want answers to the questions raised at the end of Torment! Gah!

This book was provided by the UK Book Tours and I am eternally grateful!
Written by Michelle Fluttering Butterflies at 08:15