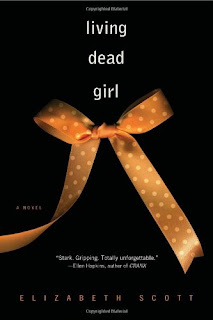 Once upon a time, I was a little girl who disappeared.

Once upon a time, my name was not Alice.

Once upon a time, I didn't know how lucky I was.

When Alice was ten, Ray took her away from her family, her friends -- her life. She learned to give up all power, to endure all pain. She waited for the nightmare to be over.

Now Alice is fifteen and Ray still has her, but he speaks more and more of her death. He does not know it is what she longs for. She does not know he has something more terrifying than death in mind for her.

This is Alice's story. It is one you have never heard, and one you will never, ever forget.

Review: Living Dead Girl is such a harrowing read. I finished it and I just couldn't do anything for awhile. I couldn't even think about reading another book for ages because my mind just kept returning to Alice and her story. The product description is entirely accurate this time, I don't think a story like this has been told before and I know that I'll be thinking about it for a long, long time. It isn't light reading at all and certainly not for the faint-hearted. Living Dead Girl is gritty and horrific. It doesn't shy away from telling all the painful details of Alice's life as the captive of a paedophile. Be warned.

Alice is 15 and isn't her real name, but the name given to her by Ray. She's been with Ray for five years now, since he kidnapped Alice from a school trip when she was 10. She used to be a normal little girl, who had friends and a family and didn't worry about food or pain. But Ray changed all that. She wakes up having been raped by Ray and her new life begins. One in which Ray threatens Alice's family in order to make Alice stay. He forces himself on her endlessly and starves her to keep her looking little, like a child. Alice dreams of death in order to be free.

In the five years that Alice has had endure such terrible, painful things at the hands of Ray, a heavy toll has been taken on Alice. She's been forced into sexual slavery and starvation that's lasted years, and she's at the point where she thinks nothing of harming other weaker children in order to feed herself when Ray is away. When Ray suggests that Alice find her own replacement, Alice can think only of the freedom that it will bring her. She starts scoping out the local playground for young girls, girls she thinks that Ray will like.

Honestly, Living Dead Girl was such a heart-breaking book to read. It's absolutely painful to read of a girl so broken and abused with only death to look forward to. You can see that there's a cruelty that has become a part of Alice after the years of abuse that she is suffered. The torment and her experience with Ray is too great to overcome without huge lasting damage. I wept for Alice reading this book. I wept for anybody that has ever had or will ever experience such atrocities.

I'm left almost speechless at this book. It made me utterly sad verging on hopeless and also incredibly angry. This one packs a punch and I am in awe of Elizabeth Scott for her versatility in writing. This is a far cry from her romantic fiction.

Written by Michelle Fluttering Butterflies at 09:28