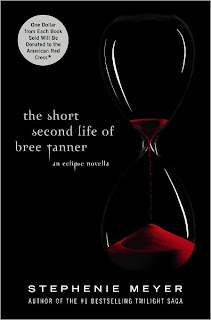 Fans of The Twilight Saga will be enthralled by the riveting story of Bree Tanner, a character introduced in Eclipse, and the darker side of the newborn vampire world she inhabits. In another irresistible combination of danger, mystery and romance, Stephenie Meyer tells the devastating story of Bree and the newborn army as they prepare to close in on Bella Swan and the Cullens, following their encounter to its unforgettable conclusion. 'I'm as surprised as anyone about this novella,' said Stephenie Meyer. 'When I began working on it in 2005, it was simply an exercise to help me examine the other side of Eclipse, which I was editing at the time. I thought it might end up as a short story that I could include on my website. Then, when work started on The Twilight Saga: The Official Guide, I thought the Guide would be a good fit for my Bree story. However, the story grew longer than I anticipated, until it was too long to fit into the Guide.'

Before this book came out I was really excited to read it. And then I think I read a spate of mediocre reviews of it. That's when I decided to wait until I saw this one in the library as opposed to running out and buying it. It was the right choice for me.

The Short Second Life of Bree Tanner by Stephenie Meyer is a novella chronicling the newborn vampire life of Bree Tanner, a minor character seen in Eclipse. Bree was one of the vampires created by Victoria and controlled by her minion Riley, who was in the clearing in this battle between Victoria's newborns and the Cullen clan and the vampires. Bree surrenders to Carlisle, but when the Volturi arrive, she is executed. I would imagine that most people who have picked this book up to read are already fans of the Twilight saga and know these details having, I'd assumed, already read Eclipse.

During The Short Second Life of Bree Tanner, we see through Bree's eyes throughout this short book, and it's very different from Bella's perspective. We witness first-hand the need and thirst of the newly-formed vampires, the ways in which Riley is able to use his knowledge of vampires in a way in which it keeps 20 powerful and impulsive vampires together and willing to do his (and by extension, Victoria's) bidding. The vampires in Riley's group are very different to the Cullens. There is no qualms about killing people, no regard for human life.

When we meet Bree, she is in the middle of a hunting expedition in Seattle. You can tell Bree is more intelligent than some of the other newborns by the way in which she tries to stay out of the way and thinks the vampires shouldn't be drawing too much attention to themselves while out hunting. Diego, one of the oldest vampires in the group thinks so too. Bree and Diego start spending some time together and together, they try to work out the point of Riley's little group, what purpose they serve. There is the beginning of a romantic relationship here, but all too soon we are geared up for the final battle between vampires.

It was fun for a little while to rejoin the Twilight saga. But it never got more than just OK for me. I felt like Stephenie Meyer was telling me things too much and not really showing them to me. I didn't have any strong emotions for Bree or Diego, possibly because I knew the fate of Bree beforehand. Bree and Diego's mystery-solving escapades didn't really interest me as the reader (as long as they've already read Eclipse) is already privy to most of Riley and Victoria's nefarious plans. The highlight of the novella, for me, was the introduction of a vampire with special skills like the Cullens posess, Fred, who is able to repel vampires away from him.

This one's just for previous fans of Stephenie Meyer and the Twilight saga.
Written by Michelle Fluttering Butterflies at 08:59