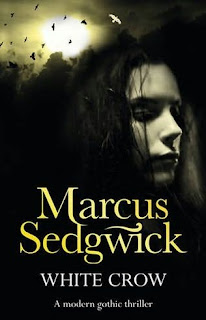 It's summer. Rebecca is an unwilling visitor to Winterfold - taken from the buzz of London and her friends and what she thinks is the start of a promising romance. Ferelith already lives in Winterfold - it's a place that doesn't like to let you go, and she knows it inside out - the beach, the crumbling cliff paths, the village streets, the woods, the deserted churches and ruined graveyards, year by year being swallowed by the sea. Against her better judgement, Rebecca and Ferelith become friends, and during that long, hot, claustrophobic summer they discover more about each other and about Winterfold than either of them really want to, uncovering frightening secrets that would be best left long forgotten. Interwoven with Rebecca and Ferelith's stories is that of the seventeenth century Rector and Dr Barrieux, master of Winterfold Hall, whose bizarre and bloody experiments into the after-life might make angels weep, and the devil crow.

I knew absolutely nothing about this book before I read it. Only that other bloggers seemed to like Marcus Sedgwick and White Crow has had some good reviews...It isn't something I generally do, reading a book 'blind' but it was fun to do and I was very pleasantly surprised with this one! It was my first Sedgwick, and now fans must let me know where to go from here!

White Crow is a story told from three perspectives. Two teenage girls living in the present day and a religious man writing in his diary centuries before. All three are living in the same small town, Winterfold, and are dabbling in things best left alone. Over this sweltering hot summer, the two girls become friends and uncover some truly frightening secrets...

Rebecca and her father have arrived in Winterfold, a family pretty broken by the events that brought them to the small and isolated town. They're not on friendly terms, compacted by the fact that Rebecca is now separated from her boyfriend in London. She isn't interested in becoming Ferelith's friend at all. Ferelith who is super-smart and sort of creepy, living on her own and not answering many personal questions. Rebecca feels very uneasy with Ferelith, not just with how she looks but the way in which she acts and speaks. But, having nothing else to occupy her mind, she falls into a friendship with Ferelith. And Ferelith knows a great deal about the town. She knows of the abandoned houses and churches. The graveyards and the cliff that is threatening to collapse with the next big storm. Together they uncover the horrific events that took place hundreds of years ago.

Honestly, White Crow was so creepy to read. It's one where I needed to keep the light on or read it in the day-time. Marcus Sedgwick manages to lace each page with unease and discomfort and foreboding. The reader knows enough to realise that the Rector and his French doctor are Up To No Good, but what are they really doing? And what's the mystery with Ferelith? I was left guessing all the way through!

I loved how Marcus Sedgwick touched on some really interesting concepts with this novel. Of heaven and hell and faith and belief with the experiments the two men carried out. Ferelith and Rebecca's friendship was so tenuous and it leaves reader questioning how well do you really know anyone? I loved the relationship between Rebecca and her father, so very raw and painful. And yet neither one was able to find the words to say to the other to make things right. And yet it is terrifying. And beautiful.

One not to miss, folks!
Written by Michelle Fluttering Butterflies at 09:33