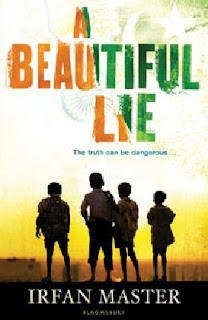 An extraordinarily rich debut novel, set in India in 1947 at the time of Partition. Although the backdrop is this key event in Indian history, the novel is even more far-reaching, touching on the importance of tolerance, love and family. The main character is Bilal, a boy determined to protect his dying father from the news of Partition - news that he knows will break his father's heart. With great spirit and determination, and with the help of his good friends, Bilal persuades others to collude with him in this deception, even printing false pages of the local newspaper to hide the ravages of unrest from his father. All that Bilal wants is for his father to die in peace. But that means Bilal has a very complicated relationship with the truth...

I absolutely loved this book. I'd seen other book bloggers review A Beautiful Lie previously and everyone had lovely thing to say about it, but until I read it, I didn't fully understand. It's such a sweet and sad story, one that will stay with me for awhile.

Bilal is a young boy, living in India with his father. All around him, in his village and in all of India there has been trouble with the news of the upcoming Partition. I was only vaguely aware of what Partition was and what had happened before this book. It seems there was much more turmoil between the major religions in India around the time of Independence than I realised. Bilal's village is changing and you can see during the course of the book the differences in people's attitudes towards each other as things begin to escalate. Stallholders and friends turn on each other, families are leaving, troublemakers and gangs appear and terrorise those left. It seems to be a very sad time in India's history, with the break-up on India into different parts.

Bilal knows that the information of Partition will break his father's heart and it seems particularly important to keep the news from his father as his father is dying. Without too much time left, Bilal tells his major, life-changing lie. He decides to keep news of India's troubles from his father and enlists the help of his friends and other villagers in order to hide the truth. While Bilal goes to greath lengths in order to protect his family, his village and his life are shaken in other ways. What I loved most about A Beautiful Lie is how beautiful the relationships are. The relationships that Bilal has with his three friends and very different, but you can see the loyalty and the affection between each boy. The four boys together are quite sweet, getting into mischief and working as a team to accomplish their goal. I love books with such strong friendships.

But it's really the father and son relationship that pulled at my heartstrings so much. Bilal loves his father very much and you can see how proud of Bilal the father is. As it gets nearer toward the inevitable death of Bilal's father, we are able to see just how much the two really care for each other. It's enough to make anyone cry. Despite the country's wavering stability in the time of Partition, there is always that hope that shines through in the form of Bilal, his friends and those around him who do their best to give one ordinary man peace before the end. It was really heartwarming to see how much Bilal's father has touched those of the villagers around him and how ready they are to do a good thing for him and his son in return. It's a beautiful book this one. One I'm so happy to have read.

It's a story that touches on the importance and morality of telling the truth and telling lies. It's a story of family and friendship set in a period of time in India that I wasn't very aware of, and Bilal and his friends really ran away with my heart. Thank you so much to Bloomsbury for sending me this book for review.
Written by Michelle Fluttering Butterflies at 09:14