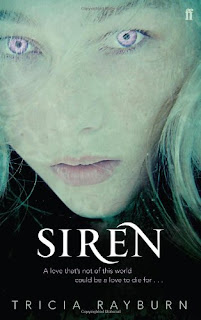 Vacationing in Winter Harbor, Maine, is a tradition for Vanessa and Justine Sands, and that means spending time with the Carmichael boys. This summer, Vanessa is determined to channel some of her older sister’s boldness, get over her fear of the ocean, and maybe turn her friendship with Simon Carmichael into something much more.

But when Justine goes cliff-diving after a big family argument, and her body washes ashore the next day, Vanessa is sure that it was more than an accident. She is more certain of this, when she discovers that her sister was keeping some big secrets and Caleb Carmichael’s gone missing. Suddenly, the entire oceanfront town is abuzz when a series of grim, water-related accidents occur, with the male victims washed ashore grinning from ear to ear.

Vanessa and Simon team up to figure out if these creepy deaths have anything to do with Justine and Caleb. But will what Vanessa discovers mean the end of her summer romance, or even life as she knows it?

I absolutely ADORED Siren by Tricia Rayburn. Really, really. I thought the mixture of romance and mystery as the events of Siren unfolded were blended beautifully. Each of the characters were done very well and I was drawn into the story and into Vanessa's head and emotions right from the start.

Siren begins with two teenage sisters, Justine and Vanessa, coming to their summer home with their parents. Living next-door are the Carmichael brothers, Caleb and Simon. Together, the four spend time together and hang out. That is, until Justine dies suddenly in a diving accident. As Justine and Vanessa's parents go home to grieve, Vanessa is determined to return and find out more about Justine's thought patterns and seek closure through learning more about Justine and her relationship with Caleb Carmichael. With the help of hot weather-nerd, Simon, what they uncover is much bigger and more sinister than they could ever have imagined as men start washing ashore dead.

There's so much to say about this book. I loved the way that information about each of the characters and the mystery surrounding this beach-town trickled through the story. We know enough about the people that populate the story and little bits of information are given to propel everything forward at just the right pace. The transformation of Vanessa, from a shy and afraid girl living in the shadows of her more charismatic sister into somebody who is bold and goes after answers and justice was wonderful to witness. You could tell immediately how much Justine and Vanessa cared about each other, and one particular scene that showed the extent of Justine's protection of Vanessa had me crying. I love reading about close family relationships.

The paranormal element is one that I've never come across before in a YA novel, and it was refreshing to read about as well as fascinating. I was absolutely riveted hearing the details and story around the people or persons responsible for the deaths of the men in Winter Harbour.

And then there's the romance. Vanessa's love interest in Siren is quite a gentle and sweet sort of romance. But as, Tricia Rayburn writes (in her amazing guest post) below, how could it be anything different? Vanessa's entire life has shifted with the death of her sister and the new information she is learning about the community of Winter Harbour and she needs somebody who's there for her, who's been there for her all along. And what can I say? I found Simon to be utterly fanciable. I love his loyalty to Vanessa, his protective nature, and his nerdiness! I'd quite like a Simon Carmichael for myself, thank you!

Amazing book, I'm really looking forward to seeing how things continue in the sequel, Undercurrent. A huge thank you to the folks at Faber for sending this book for review! Siren comes very highly recommended from me. I asked Tricia Rayburn if she would like to write a guest post for Love Month, and she sent me this incredible piece about the characters in Siren.

Tricia Rayburn is the author of Ruby’s Slippers and the Maggie Bean trilogy. Despite fearing all creatures of the deep, she’s still drawn to the water and makes her home in a seaside town on eastern Long Island in America. To learn more about Tricia Rayburn, please do visit her website!

Let’s face it: Simon Carmichael, Vanessa’s love interest in Siren, is no Edward Cullen. He’s a teenager. He eats regular food. He drives an old green Subaru. He can’t race through the woods at lightning speed. His idea of a good time is monitoring the tides and predicting the weather. When he wants to see the girl he likes, he doesn’t magically appear in her bedroom while she’s sleeping; he knocks on the door and hopes she’ll answer.

Compared to other paranormal paramours, Simon’s perfectly ordinary. But that doesn’t make him any less a romantic hero.

Since Siren’s release, many readers have told me how happy they were to discover that Simon was a “good” guy. I have to admit, I was a bit surprised the first few times I heard this. Not because readers were pleased, but because I wasn’t really thinking of “good” versus “bad” when considering who’d be the one to steal Vanessa’s heart. Instead, I thought of the kind of person a girl could fall in love with while experiencing some of the worst trauma and heartache imaginable—and unimaginable. Because during that fateful summer in Winter Harbor, Vanessa suffers many losses. She learns things about herself and her family she wishes she didn’t. The world she’s known for seventeen years, and everyone in it, comes crashing down around her. These are the kinds of circumstances that make an already shy, introverted person want to turn in and shut out others even more. And that’s exactly what Vanessa would’ve done with anyone else…except Simon.

Simon is good. But the reason he and Vanessa work runs much deeper than that. In the bigger picture, their time together has been fairly limited; Vanessa and her family only spend summers in Winter Harbor and are in Boston the rest of the year. The boy/girl-next-door situation that often leads to young romance is hindered by calendar and geographic limitations. Simon, however, hasn’t wasted a minute. He recognized early on that Vanessa was always too busy idolizing her fearless older sister Justine to be too concerned about herself. So he looked out for her. It didn’t matter whether they were playing hide and seek in their backyards, hiking in the woods, or just hanging out and watching movies. Without ever making her uncomfortable, he made sure she was always comfortable. It’s this protective yet non-intrusive attention that helps him know her better, in some ways, than she even knows herself. And it’s what Vanessa realizes and embraces when her world spirals out of control and she needs someone to hold on to.

Of course, as strong as their relationship is it’s not without complications. When Vanessa finally learns who—or what—she really is, she’s too scared to tell Simon the truth. He’ll eventually find out, though, and when he does, both he and Vanessa will ask themselves one question they never thought they would. It’s something countless literary couples, regardless of who’s good, bad, or somewhere in between, have wondered.

Can love—the real kind, complete with understanding and acceptance and compassion— really survive anything?

Absolutely…at least if Simon Carmichael has anything to do with it.