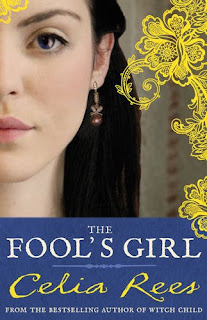 Young and beautiful Violetta may be of royal blood, but her kingdom is in shambles when she arrives in London on a mysterious mission. Her journey has been long and her adventures many, but it is not until she meets the playwright William Shakespeare that she gets to tell the entire story from beginning to end. Violetta and her comic companion, Feste, have come in search of an ancient holy relic that the evil Malvolio has stolen from their kingdom. But where will their remarkable quest—and their most unusual story—lead? In classic Celia Rees style, it is an engrossing journey, full of political intrigue, danger, and romance.

This wholly original story is spun from Shakespeare's Twelfth Night, and includes both folly and suspense that would make the Bard proud.

I'd not read a book by Celia Rees before The Fool's Girl. I'd heard such good things about her though, so I was excited, and I shall definitely be picking up some of her other books in the near future. I also didn't know much about Twelfth Night by William Shakespeare either, so reading this book was a bit of an education. But an entertaining one.

Despite not having a great interest in historical fiction, I do find myself to be quite fascinated with Shakespeare and the period of time that he lived. But in that sort of abstract way. I don't actually know very much about it, but I think that if I did read about it, I would enjoy it like I enjoyed The Fool's Girl.

What I knew about Twelfth Night beforehand, as I said, was very little. That Viola washes up a beach. That a lot of the play is concerned with mistaken identity, as Viola pretends to be a man. It's a comedy. But what Celia Rees does with this book is give the main characters of Twelfth Night a history and a future. She gives shape and history to Illyria which is told in great chunks of narrative from the voices of Violetta, Viola's daughter, Feste, the Fool, and Maria, a servant.

I admit that at first, it was a little difficult to get into, when the storyline was first interrupted in order to relay to Will Shakespeare of the events that occurred in Illyria. But once I slowed down and was able to read and soak in this new story about an interesting place, I found myself swept up into the story. There's so much intersting details of this period of time, there's action and adventure and some amusing characters.

The story takes place many years after the events of Twelfth Night, after death and grief strike Illyria and it is conquered by a neighbouring enemy and looted of its national treasures. Violetta and Feste follow an important religious relic to England, where they enlist the help of William Shakespeare in this plan to take back what rightfully belongs to Illyria. And in the process we see a little glimpse into Shakespearean London and the comings and goings of the Globe theatre. There's intrigue and fighting, there's a hint of magical stones, religious artifacts and the hint of a really sweet romantic relationship. A very entertaining and interesting read! One I can recommend.
Written by Michelle Fluttering Butterflies at 09:21