My Littlest at nursery

...It's finally time. My Littlest turned three in March, and now he's old enough to go to nursery for half a day during the week. We've settled on afternoons for him and we had a little nursery visit beforehand and a home visit from some of the nursery workers.

Through it all, Littlest has felt a little nervous about attending. I'd noticed since my Eldest went off to primary school last September that my Littlest felt a little unsure of himself. A little shy around other people that doesn't show up as much when his big brother is around him to give him comfort and assurance. Now that he's on his own, Littlest has always felt a little unsteady. When I took him to swimming classes and a music and dance class he's always shied away and even hid from children his own age. So I worried.

I worried that he might find going to nursery to be a trying time for him. I worried that he'd want me there or that he'd be afraid. But something happened recently, or it could just be a gradual change in himself but whatever the case, his first day at nursery was last week. And he was thrilled and excited to go. 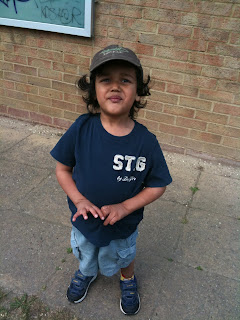 We live quite near the nursery, it's only a few minutes walk away. And every day that he's been, he bounces along or drags my arm to hurry and when he sees the school, he shouts 'MY SCHOOL!' and does his little dance. 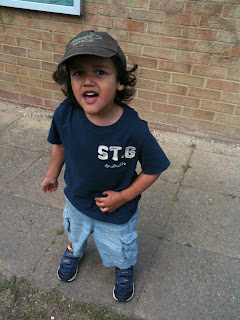 And at the same time as being absolutely thrilled to bits that he's had no trouble, I'm also a little sad. He's my baby. I've spent the last three years with him constantly nearby, entertaining him and reading to him. And now the house is so quiet without his beautiful laughter filling it up.

I hold him tight when I go to collect him every day.
Written by Michelle Fluttering Butterflies at 09:31

Email ThisBlogThis!Share to TwitterShare to FacebookShare to Pinterest
Labels: I'm having a heartattack just thinking about how quickly you're growing up, littlest, personal wednesdays