REVIEW: The Land of Painted Caves by Jean M. Auel 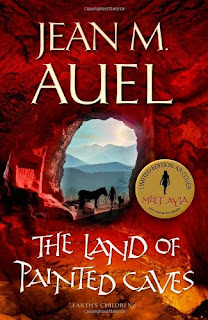 THE LAND OF PAINTED CAVES concludes the story of Ayla, her mate Jondalar, and their little daughter, Jonayla, taking readers on a journey of discovery and adventure as Ayla struggles to find a balance between her duties as a new mother and her training to become a Zelandoni - one of the Ninth Cave community's spiritual leaders and healers. Once again, Jean Auel combines her brilliant narrative skills and appealing characters with a remarkable re-creation of the way life was lived thousands of years ago, rendering the terrain, dwelling places, longings, beliefs, creativity and daily lives of Ice Age Europeans as real to the reader as today's news.

I've put off writing this review for more than a month in order to make sense of my thoughts and feelings about The Land of Painted Caves by Jean Auel. And I think I've finally found the right words to describe how I felt about it.

I think it was always going to be difficult to live up to the high expectations that fans of this series would be expecting. And obviously I include myself in that. Waiting nearly a decade for the final instalment of a much loved series is always going to be hard-going. But while it was comforting to go back to the characters of Ayla and Jondalar and return to their story amongst the Zelandonii, it was also disappointing.

Reading it, it felt as though I were detached from the story and looking at these characters from a distance. It felt as though Auel was trying to show us too much of the history and the lives of Prehistoric people, and especially the artwork and significance of these painted caves dotted around Europe. As a reader, I wanted a more personal story. I wanted to read more of Ayla's struggle with being a mother, a wife, and a zelandoni-in-training rather than reading of her treks to one painted cave after another. I don't recall now if other books in the series had such a shifting perspective, but I'd have expected to have witnessed more of this story from Ayla's perspective.

Much of the story also felt very repititious. There's a great deal that is said over and over as Ayla meets new people, about her accent and her origins that as a fan from the beginning of the series I was already familiar with. I was very weary of reading the same information, and it felt like lazy story-telling. And while I've always enjoyed the many glimpses into the history and social practices and beliefs, it was too much in this book. It was only during the last 100 pages or so, when we see a massive and almost too-sudden problem arise between Ayla and Jondalar that I felt any real emotion for the story or these characters. And all too soon, the book has ended with so many questions unaswered.

I'm glad that I've read the book and learned of the outcome of Ayla and Jondalar, but I wonder if this story became too large in scope for Jean Auel. It feels like a bit of a let-down, and that really is quite disappointing.
Written by Michelle Fluttering Butterflies at 08:55