I may have mentioned before that I played quite a bit of sports when I was younger. I think it comes from being raised by a single father. My dad was very sporty in his youth (being a competitive swimmer, and a very good one at that), and I think he had no idea how my brother and I should occupy ourselves other than enrolling us onto a sports team.

My brother, being older, chose first. He decided on boxing. I was rather partial to ballet with the pink leotards and the fluffy tutus. But instead, I ended up boxing with David. Not officially, but I was roped into as my brother got more excited and involved with it. It didn't last long though. The boxing club that David was part of shared the same space as the local swimming pool. Very quickly, David changed his mind about boxing and decided to join the swim team.

I did the same. David and I had both grown up listening to our dad's stories about his swimming days. It all sounded like so much fun that I think we both really wanted to be part of something like that. David and I took to swimming very naturally. With very little experience or time in the water, we both made it to the state championships. We'd spend a lot of our weekends at swimming meets in nearby towns and soon one pool blurred into another. There was a lot of waiting between heats and I remember joking and messing about with my teammates for what seemed like hours on end. Sadly, I don't have any photos from my swimming days. Swimming is something that I really love to do, I feel at home in the water and I miss the rhythm and satisfying monotony of doing laps and clearing my head. 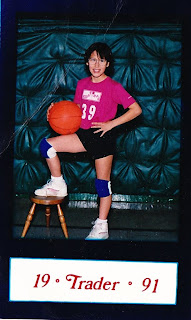 But I think I also wanted to do something a little more social. So I joined the basketball team. My best friend from when I was 8 was very into basketball and her father coached the local Kidsports team. So I did that too. The thing with basketball though, or with most sports involving balls, is that you need fairly good eye-hand coordination. And I do not, nor have I ever, had much of that.

The thing with sports teams when you're that little though, they pretty much allow everyone to join no matter what. So I played basketball and I had fun doing it. I even remember the thrill I felt the first time I scored a basket. It was the highlight of my life. I still feel like one of my life's major achievements is when I came 2nd in the free-throwing competition in all of Lane County. I still feel proud of myself for that.

While I was playing basketball though, my brother had chosen to play baseball. Baseball, I thought, that could be fun. So, I joined a softball team. Again, I seemed to come across the same sporty girls and I felt like I fit in and that I belonged somewhere. I loved it, despite being poor at hitting the ball or even catching it. It didn't seem to matter much, until it did. There was one particular season that changed it all. There were too many girls who signed up one year. So they split us into two groups. And while everyone said that the teams were randomly allocated, it became quite clear that the teams were really split by skill. And I didn't make the 'good' team. I was so upset about that when I found out that I nearly quit the team. I'm glad I didn't though and our team of rejects and cast-offs placed 2nd in the county championships whereas the 'good' team didn't place at all. 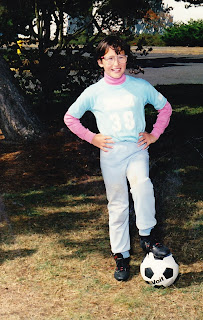 My dad took me aside after that and asked if I was still happy playing softball. He said I didn't have to play any sport if I didn't want to. I told him there was something I'd rather be playing. Soccer. I'd always wanted to play but I hadn't really known anyone else who did. I'd always just followed my brother's lead or my best friend's.

And in the end, aside from swimming, soccer was the thing I loved the best. I became a fair defensive player, letting others control the ball more and avoiding any pressure of trying to score goals myself. I made different friends, I was happier with my teammates and my coaches.

But that ended too. As I was getting older, I began feeling more self-conscious about my body and myself. I had already been teased about my glasses (and the accompanying dork-strap that I'd have to wear to practices and games) and my short haircuts were the butt of many jokes. I thought that by quitting sports I'd save myself the hassle of weight jokes as well. I don't know. I'd already quit swimming because I didn't feel comfortable wearing just a swimming suit around. I felt paranoid that my extra weight jiggling around would be noticeable to everyone that I quit soccer as well. I feel sad now. Especially when I look back at the photos and I wonder 'what was I thinking?'

I did also join the track team briefly in middle school, but it was a short-lived attempt at playing sports again. Swimming, basketball, softball, soccer, track. I really did enjoy them all. I don't think I led a misspent youth playing these sports, I just wish that I'd quit them for better reasons. Or possibly that I hadn't quit them at all.

Did sports play a big part of your childhood like it did mine?
Written by Michelle Fluttering Butterflies at 14:17