REVIEW: One Of Those Hideous Books Where the Mother Dies by Sonya Sones 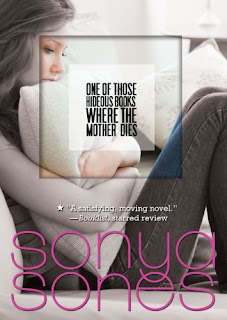 Fifteen-year-old Ruby Milliken leaves her best friend, her boyfriend, her aunt, and her mother's grave in Boston and reluctantly flies to Los Angeles to live with her father, a famous movie star who divorced her mother before Ruby was born.

I am a massive fan of Sonya Sones and I've been waiting to read this book for ages. What I find most appealing about Sonya Sones' verse novels is how much emotion can be packed into these simple poems. Even the very mundane details of Ruby's life are filled with her hurt and anger over moving to California to live with a father that she's never known, the grief she is feeling over her mother's death.

Ruby's mother passed away, and as much as she doesn't want to talk about it, Ruby's thoughts and her poems always seem to come back to her mom. Wanting to hold her hand on the flight to LA, writing her emails discussing heaven, the afterlife. Poems that describe the last time Ruby saw her mother alive. Ruby is in pretty desperate need of her mother now. She's moved from Boston to California, she's started a new school, she's left behind her best friend and her boyfriend. And she's living with a really famous actor father (named 'Whip Logan' of all things!) who seems egotistical and attention-seeking. Ruby sees her father's attempts at buying her things and driving her to school every day as actions of a guilty and controlling father. All Ruby wants to do is yell at him that it's too little, too late. But eventually, she must come to terms with how different her life is now and that her mother is never coming back...

On top of everything, she must deal with fitting in at a new school, the fact that Cameron Diaz lives next door to her (and is possibly dating her father), she has to make new friends at a school where everyone wears designer clothes and takes weird classes like dream interpretation. And she has to deal with yet more loss by leaving her best friend and boyfriend behind. At times, this book can feel a little bit angsty, but it's really understandable with every thing that Ruby is going through. I love that at least Ruby has Max, Whip's personal assistant around to have someone to talk to about her troubles.

I felt Ruby was a teenager that most of us can relate to. Needing her mother, her best friend, in the middle of an intense first relationship, being unsure of herself and awkward at a new school. I really felt her bitterness at Whip for what she believes he did to her mother and her grief at her mother's death pulled at my heartstrings.

Here is one of Ruby's poems on page 4.

She used to squeeze my hand so hard
during takeoffs and landings
that she'd cut off my circulation.

She'd screw her eyes closed
and whisper this silly prayer someone taught her once.
Something about manifold diving blessings
being unto the plane or the universe
or some hippy-dippy thing like that.

And if there was even
a teensy bit of turbulence - forget it.
She'd start apologizing to me
for every mean thing she'd ever said
or done or even thought about doing.

This morning
when the plane was lurching down the runway
and I didn't have Mom's hand to hold,
my heart flung itself up into my throat.
And for a minute there
I couldn't even breathe.

by her.
Written by Michelle Fluttering Butterflies at 09:34