REVIEW: Prisoner of the Inquisition by Theresa Breslin 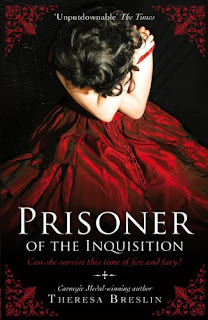 Here's a book that completely took me by surprise. I've said for years that historical fiction just isn't my sort of thing and then Prisoner of the Inquisition by Theresa Breslin comes along and I'm absolutely blown over by how much I adored this story, these characters and the absolutely fascinating historical setting. I really need to rethink my stance on historical fiction from now on. Also? I need to pick up more books by Theresa Breslin because I have been won over by her style of writing.

Prisoner of the Inquisition takes place during the Spanish Inquisition, around the time that Christopher Colombus is gathering funds in order to make his famous trip overseas. While not only making Christopher Colombus a minor character, which was quite cool in itself, I also learned an incredible amount of the politics and some of the reasons and goals of Isabella and her justifications of the Inquisition. All of the historical aspects of the novel felt like a natural progression of the story and it didn't feel heavy or forced at all. I was learning without realising it, which I think takes great skill.

We have a dual narrative here from both Zarita, the wealthy daughter of the magistrate and from Saulo, the son of a poor family in town. Zarita and Saulo first cross paths when Zarita falsely accuses Saulo's father of assault and as a consequence, Saulo's father is hung and Saulo sent off to become a slave on a ship. It all happens very quickly and immediately Zarita realises the grave error she has just committed that has cost someone his life. This event changes and shapes both Zarita's and Saulo's life.

Alternating between their two stories, Saulo describes what life as a slave aboard a ship is like. The hard work, the poor treatment and a life of nothing but drudgery in his future. However he is quite fortunate to be taken under the wing of the captain and is able to learn more about shipping and constellations and exploration. Saulo's whole experience was absolutely fascinating and I found myself eager to get back to it.

Zarita, on the other hand, is really struggling at home. With the loss of her mother, her whole world is thrown into turmoil as the inquisition sweeps into her town and she has this really tenuous relationship with her father and his new wife. There's so much at play in this book - it deals with growing up and becoming your own person, atoning for the mistakes in the past, forgiveness, family and love. I loved every minute of this book and can highly recommend it!
Written by Michelle Fluttering Butterflies at 09:40