My best and worst birthdays

As it's my birthday this week, I thought it would be fun to look at some best/worst birthdays, gifts and cake. Please, please, please share your own! I would love that.

When I was younger, as you'll find out later on in this post, I never had great birthdays. I think my family just weren't very thoughtful about them, nobody really tried to make the day special in any way. Usual presents for me growing up were things for the future. Things I'd probably have or get to do whether or not it was my birthday but that got lumped into the category of 'birthday presents' anyway. Together with my birthday falling in the middle of summer when I wasn't in constant contact with school friends, it mostly felt forgotten. 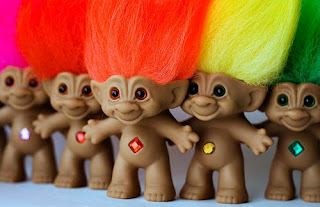 Worst birthday present - I don't remember how old I was, but I think I was maybe 11. And my best friend in the whole world at the time celebrated her birthday a few weeks before me. I have NO idea what I gave her for her birthday (if anything at all!) which may have been a factor in her birthday present to me, I'm not sure? Anyway, the morning of my birthday, the doorbell rings, and she's standing in front of me. She says 'Happy birthday' and whips out of her pocket this teeny little troll, you know the ones, with rainbow coloured hair. She has this huge smile on your face as I took it, she dashed away yelling 'bye' over her shoulder.

I actually quite liked the little thing, I always thought they were kind of cute. It did strike me as a little odd as I hadn't had any of the trolls before that and had never mentioned liking them, but whatever. I liked it. I liked that she'd remembered. It was only a few weeks later that it became my worst birthday present ever.

My best friend, I'm going to call her Sally, had her first boyfriend that summer. In fact, when she ran away on my birthday, I think she'd gone to spend the day with him. So, a few weeks later, Sally and I were at the dollar store (we were 11!) shopping for her boyfriend's birthday present. I remember picking up a troll with blue hair and holding it up to Sally 'what about this?' and she looked at the troll, nearly identical to my very own and said 'Not a chance! I can't give him something so stupid and immature.' and turned back to whatever she'd been looking at.

Aww. What a thing to have held onto for more than 15 years. 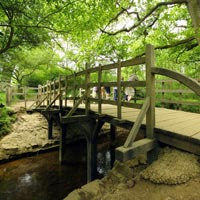 Best birthday present: I don't remember every present I got that year, but I remember for my 21st birthday, N really pulled out all the stops. He thought really long and hard and he gave me 21 of the most thoughtful and wonderful presents ever. And he spread out opening the gifts over the entire day. They just kept coming and coming and it was all so overwhelming!

We'd spent the day at Pooh Country, you know how much I love Eeyore, and we played pooh-sticks at this bridge and it was such a great day. I loved it so much.


Worst birthday: So, so many. The year everyone forgot. The year my birthday was spent tired and hot driving through Northern California. When we stopped for the night, it was in a casino hotel and my dad and brother left me alone in the hotel room to go gamble. The year I was sent off to a boot camp and spent the day doing manual labour. They all happened on or before my 16th birthday though. They're all behind me and I think as I get older, it becomes less important to me, celebrating in any way. Perhaps next year I'll feel differently about birthdays though, who knows? (I'm 29 this year - I wonder how I'll feel turning 30!)


Best birthday: Since I met N, birthdays have really turned around. The birthday that stands out for me is my 18th, seeing as how I've already mentioned my 21st!

The time around my 18th was pretty hectic. N had flown out to see me and together we'd flown from Oregon down to LA to visit the British High Commission in order to apply for a visa for me to return to England with him. We'd spent a few days in and around LA, visiting Disneyland (where N proposed!) and then just before my birthday, N and I flew to Seattle. N had rented this adorable little bed and breakfast for us.

We spent the day sightseeing and then when it came to dinnertime, we found a nice Indian restaurant (N's favourite and my first ever time eating Indian food) and N had bought me a beautiful dress and shoes and a handbag. It was all very nice, especially the mango cheesecake for dessert! 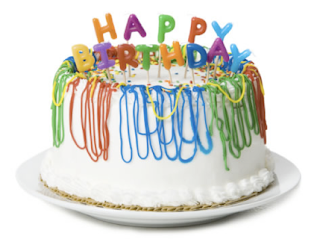 Birthday cake: When I was younger, my brother and I always had store-bought birthday cakes. There'd be big puffy blue flowers and little plastic toys and 'Happy birthday' spelt out in really shaky icing. I never knew any differently. For my 21st birthday, N went to our favourite little bakery and bought a fancy birthday cake that was absolutely DELICIOUS. But I had my favourite birthday cake on my 16th birthday.

I've mentioned previously that I spent my 16th birthday at a boot camp surrounded by delinquents doing manual labour. But it really wasn't all that bad. Every week, each crew was able to pick one special something for dessert. And my crew leader saved this boxed cake mix to have on the night of my birthday. How he managed to bake a cake over a campfire is beyond me, but it came out pretty good. He'd even brought things to make homemade ice cream. And as my crew and I sat around the campfire that night with our cake and our ice cream, they went around in a circle and each one of them said one nice about me in lieu of presents. It was the nicest thing anyone had ever done for me, and I will always remember it.

What have been your best or worst birthdays so far? What things will you always remember about birthdays past?
Written by Michelle Fluttering Butterflies at 13:19