REVIEW: Fall For Anything by Courtney Summers 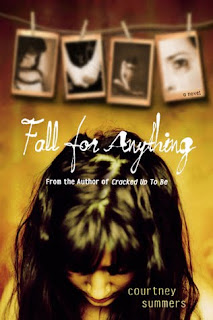 From the author of Cracked Up to Be and Some Girls Are comes a gripping story about one girl’s search for clues into the mysterious death of her father.

When Eddie Reeves’s father commits suicide her life is consumed by the nagging question of why? Why when he was a legendary photographer and a brilliant teacher? Why when he seemed to find inspiration in everything he saw? And, most important, why when he had a daughter who loved him more than anyone else in the world? When she meets Culler Evans, a former student of her father’s and a photographer himself, an instant and dangerous attraction begins. Culler seems to know more about her father than she does and could possibly hold the key to the mystery surrounding his death. But Eddie’s vulnerability has weakened her and Culler Evans is getting too close. Her need for the truth keeps her hanging on...but are some questions better left unanswered?

I really adore Courtney Summers. I've read her previous two books, Cracked Up To Be and Some Girls Are and I absolutely adored them both (but especially Some Girls Are). I think she writes really emotional, if slightly gritty contemporary fiction amazingly well and I think I will always be excited to read any new books that come out from her.

And Fall For Anything was no exception. While not as emotionally moving as Some Girls Are was for me (and I think that would be incredibly hard to do), I was still immediately hooked into the more subtle and haunting story and into the characters of Fall For Anything. Everything about Courtney Summers' stories feels like it's written with jagged edges and broken glass. Witnessing Eddie Reeves' grief over the death of her father was almost painful to witness. All of the confusion and despair that Eddie feels is so realistic and believeable that I began to feel sad and confused and frustrated and angry, just like Eddie. I think Courtney Summers is incredibly talented in order to accomplish that.

When her father commits suicide, it sends Eddie into overdrive trying to fit together the missing pieces of her father's life in order to work out why? Why does a successful photographer with a great amount of talent and a family that adores him take his own life? There must be a reason, and Eddie feels as if she could learn the answers by studying his photographs or visiting the place where it happened. She just can't let go of her burning questions, so consumed she is by her own grief. So when she meets Culler Evans, a charming but off-balance former student of her father's, she's propelled on this crazy mission despite everything.

I couldn't look away from how wild and all-consuming Eddie is in exploring every aspect of her father's life and suicide, searching for answers that aren't there. She becomes obsessed with this, forgetting that other people in her life have lost someone as well. Eddie's mother needs help in order to manage on her own, and Eddie pushes away her best friend, Milo, when he refuses to discuss with her what exactly happened when Eddie found her father's body.

Fall For Anything is such a sad but beautifully written book that will pull readers immediately into the heart of of a girl broken by a huge tragedy. This one comes recommended from me.
Written by Michelle Fluttering Butterflies at 09:54