REVIEW: A Most Improper Magick by Stephanie Burgis 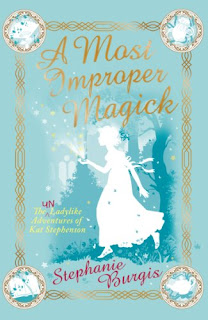 AHHHH! I love this book. Really and truly. A Most Improper Magick by Stephanie Burgis is such fun that all the way through reading it, I just felt incredibly happy. There's just something so wonderful about Kat Stephenson that it makes me grin wildly and cheer for her.

A Most Improper Magick is the story of Kat Stephenson and her sisters who are living in Regency England, which means that there are so many rules and restrictions placed on females in terms of manners, and decorum and marriage. And Kat Stephenson lives to break every single one of those rules! She's a fesity 12 year old girl who as the story begins has chopped off her hair in this mad scheme to run away to London in the disguise of a boy in order to make her fortune. The reason? So that her eldest sister doesn't have to marry an old, possibly-dangerous man in order to save her family from her brother's gambling debt.

I think that's the best thing about Kat - she's stubborn and obviously very unladylike, and she gets into the worst scrapes. But you can tell that everything Kat does (however misguided) is for the benefit of her family (and because she doesn't quite believe in the ideals of the time!). In fact, aside from the wonder that is Kat Stephenson, my second favourite aspect of the novel is the wonderful relationship that Kat has with her two older sisters, Elissa and Angeline. I love the dynamic between the three of them and how well they know each other's mannerisms - from facial expressions to different tones of voice to their very short tempers. I've always wanted a sister, and after reading this book, I've decided that more than anything, I want to be a Stephenson sister!

So, the family are in a bit of trouble, with Charles, their rather useless brother, gambling up a storm and getting into terrible debt. Kat's step-mother decides the best solution to the family's problem is negotiating for the eldest Stephenson to be married to an older man and Angeline and Kat both have serious objections to this, which they deal with in similar yet very different ways: magic. What follows is this hugely exciting tale of sisters and love spells, a mysterious magical order and a highway bandit. Seriously, this book is amazing and I can't recommend it enough. It's funny and fun and I was constantly wondering how on earth is everything going to turn out OK after the messes that Kat and her family land themselves in. I love the different types of magic involved in the story and I can't to wait to explore it more in the following books.

Also? The absolutely final scene had me whooping with excitement as it is just perfection. Please read this book, it is incredible.

Coming up - this week is heavily devoted to the awesome Stephanie Burgis, as I will be reviewing the sequel, A Tangle of Magicks as well as bringing you both a guest post AND interview with Stephanie Burgis! Stay tuned.
Written by Michelle Fluttering Butterflies at 08:58